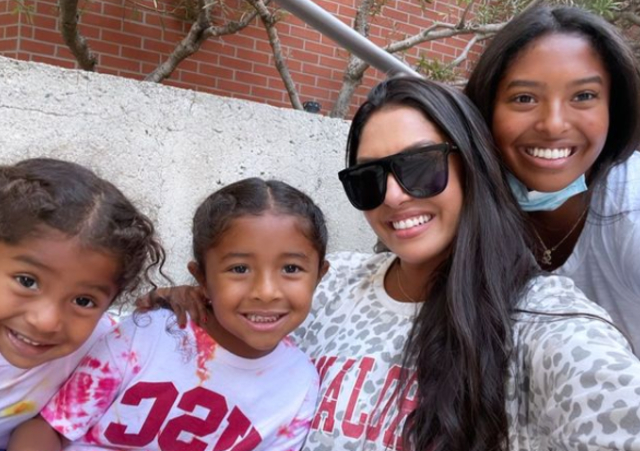 Vanessa Bryant shed a few tears after dropping her daughter, Natalia Bryant, off at the University of Southern California (USC). The celebrity mom shared an Instagram post in which she shared her feelings on Wednesday (August 18).

“Today was rough,” Vanessa admitted. “This was before the tears came down,” the celebrity mom said of the picture she shared. “Missing ✌🏽forever,” Vanessa wrote online. “I love you @nataliabryant,” the celebrity told her daughter. “Be epic and fight on.”

The University of Southern California has been a dream school of Natalia’s for years. Vanessa revealed her daughter entertained the idea of going to New York for school but, nevertheless, had her fingers crossed for USC.

“Congratulations Nani Banani,” Vanessa wrote to her daughter after Natalia received her acceptance letter. Vanessa went all out to commemorate what she hoped would be her daughter’s acceptance to the university.

“If you wouldn’t have been accepted I would’ve had to have stabbed these balloons in the guest room and have thrown all this away,” Vanessa mused. “Thank goodness you got in,” the celebrity mom wrote to her daughter. “I had these shoes made for @nataliabryant in hopes she’d get into her top school.” The shoes Vanessa had custom-made for her daughter’s college ventures bolstered USC’s theme colors of gold and maroon.

“I’m SO happy for you Nani,” Vanessa Bryant wrote to her daughter. “I am so PROUD OF YOU! Your hard work and dedication was (sic) so worth it. You pushed through the most excruciating pain imaginable and you succeeded. I wish Daddy and Gigi were physically here to celebrate but I know they’re here in spirit. We love you so much!”

Natalia is Vanessa and the late Kobe Bryant’s oldest daughter. Vanessa welcomed four daughters – Natalia, Gianna, Capri, and Bianka – with her husband before his and their daughter Giann’s untimely passing last year. Natalia starts her freshman year at USC in the fall.