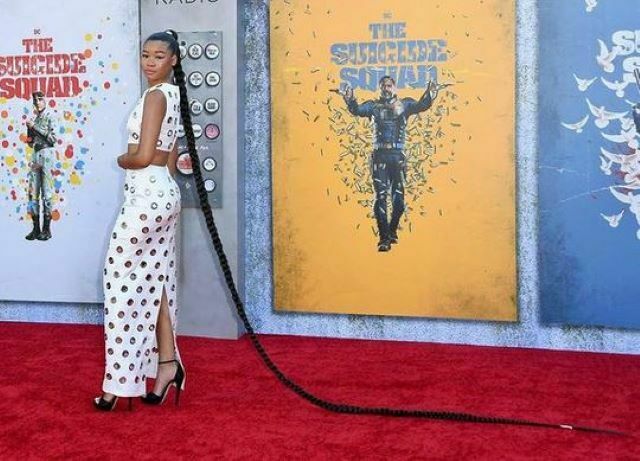 Storm Reid attended The Suicide Squad in custom Prada and a 16-foot braid, and she looked truly fierce!

No one on the red carpet could keep their eyes off of the Euphoria star as they attended the premiere at the Regency Village Theatre in the Westwood section of Los Angeles.

And of course, she wore it well and her fans and fellow celebrities let her know!

According to Popsugar.com, the braid was the work of celebrity hairstylist Nai’vasha Johnson, who shared that she created the sleek look using the Tresemmé Tres Two Extra Hold Hair Gel and kept every hair in place by finishing things off with the Tresemmé Tres Two Freeze Hold Hair Spray. According to the news outlet as well, in Reid’s Instagram Stories that she shared at the end of the night, she jokingly mentioned wanting to measure the braid before taking it out, and she even playfully held it like a lasso while posing for photos with it on the red carpet.

If you are not familiar with the new plot of The Suicide Squad, here’s a brief synopsis: supervillains Harley Quinn, Bloodsport, Peacemaker and a collection of nutty cons at Belle Reve prison join the super-secret, super-shady Task Force X as they are dropped off at the remote, enemy-infused island of Corto Maltese.

The Suicide Squad comes out this Friday, August 6. Let us know, are you planning to watch? Sound-off, we want to hear from you about the movie and the 16-foot braid!