STORM REID DISHES TO ELLE MAGAZINE ABOUT “EUPHORIA” AND MORE 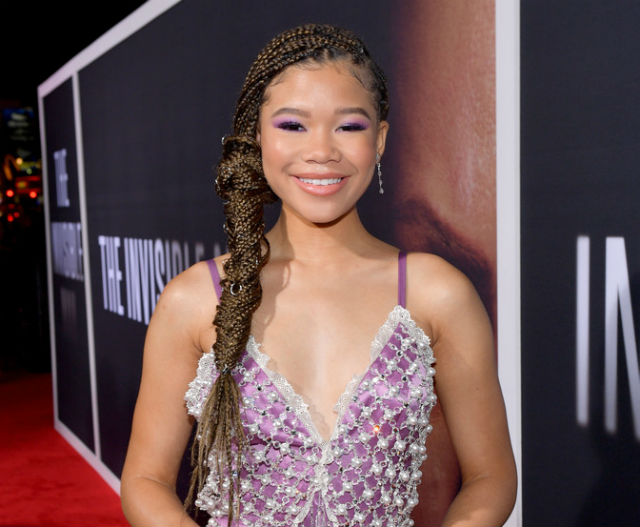 Storm Reid is one of young Hollywood’s most sought after and talented young actresses. Recently, the young star sat down with Elle Magazine to dish about season two of Euphoria, staying active while in quarantine and her sisterhood with Zendaya, and more.

Take a look at an excerpt of what she had to say below. To view the interview in its entirety, click here.

How did you got involved with Aerie’s OFFLINE label?
I’ve been using their products for a while now because I love to work out and be active. But the thing that struck me the most with Aerie is they make clothes specifically for real-life. Even though I’ve been trying to stay in the house, I’ve been going to the grocery store and the post office and doing some essential things. I feel confident enough to wear these clothes outside the house and look cute and confident but also comfortable. And if I want to work out in them too, I can.

Any favorite pieces from the collection?
My favorites are the tie-dye leggings and sports bra. My favorite color is blue, so I think that’s why I love it so much. I also like this tie-dye trend people have been doing during quarantine. The OG leggings are my go-to because they’re comfortable [and] also keep me warm. It’s really hot in California, but even though I feel like they would keep warm in the fall, they’re not too hot for working out outside in the summer.

How has your own wellness and fitness routine changed during quarantine?
Around September of last year, I started training with my trainer, Fitnessiam, so [going] from training four times a week to not being able to go to the gym due to safety precautions has been a transition for me. I want to go to the gym, it really sets up my day, but it’s just not safe at the time. Thankfully, I have a treadmill at home, I have a Peloton bike, and I have a lot of open space to still be active and get my movement in, even though I’m not technically in the gym with my trainer.

What books, TV shows, and movies have you discovered in quarantine that you love?
I’ve been watching a lot of documentaries. I’m a big sports/sneakerhead so I watched The Last Dance, which was amazing. I watched Little Fires Everywhere. I have to support Ms. Reese and Ms. Kerry and that show was incredible. I’m so proud of them for their Emmy nominations. I watched the documentary Three Identical Strangers, which I found really interesting. And then right now, going back into the sports world, my brother plays football and he introduced me to this documentary on Netflix called Last Chance U.

One of my favorite shows isn’t filming right now and that’s Euphoria season 2. What can you tease about the new season?
Well, we had the table reads for season 2 right before the shut down. The scripts are pretty incredible. I can’t spoil too much about those. But pertaining to Gia, I feel like this season we’ll really get to see who she is outside of just being Rue’s little sister. She will really become her own person and her own character and she really is growing up in the show, which I love. I love that we’re going to see more of the family dynamic and how Rue has really turned her life upside down and how that might change the course of her life forever. I guarantee when the world is safe and we’re able to go back into production, we’re going to put 150 percent into it and hopefully audiences will love it as much as they love season 1.

Do you know if the pandemic will play a role in Euphoria‘s second season?
None of the scripts I read have the elements of being smaller or relating to the pandemic. I think we’re just all waiting to see what’s going to happen. I know that Sam [Levinson, the show’s creator] is the only one who writes the scripts, so he’s very involved and puts his heart and his all into everything that goes into Euphoria. I can’t speak for everybody, but I think our hope right now is to get over this and be able to go back into production like we planned and do it safely.

What was your reaction to Zendaya’s recent Emmy nomination?
I woke up and that was the first thing I saw on my phone and I literally screamed. I posted a few Insta stories and then texted her. I’m immensely proud of her. I know the type of person she is and how much effort she [puts into] acting. I’ve been able to see that firsthand and have her as a bonus big sister. But [she] is also someone I have looked up to since I was nine. She’s always emulated the perfect example of being a young woman who was unapologetically herself, but can still be a role model to a lot of young people and show the world that she can do a lot of things. Yes, she was on Disney Channel, but I feel like she made a beautiful transition into [being] a young adult and what she’s doing now. I am inspired.

Zendaya and Sam made a secret movie during quarantine. How much did you know about that when it was shooting?
I knew that she was out of town filming a project, but I had no idea she was shooting a movie and shooting a movie with Sam. The internet went really crazy when she posted it. I was one of those people to be like, “Oh my God, that is so cool.” And I was a little jealous because I was like, “Dang, I wish I was working right now.” But I’m super duper proud of her and super duper proud of Sam and John David Washington and I can’t wait to see the magic they made.