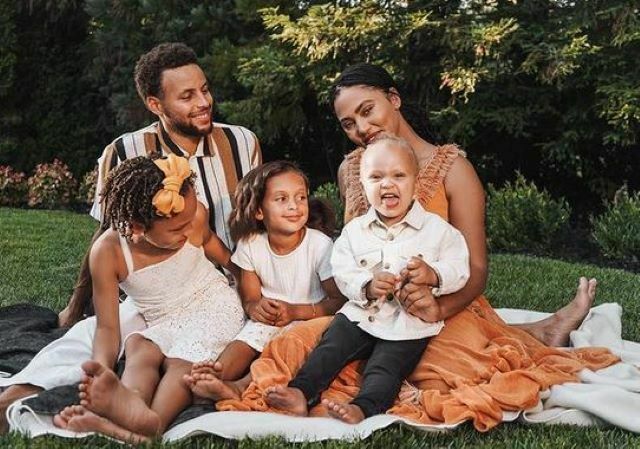 In this a recent podcast episode of Skimm’d From The Couch, Ayesha Curry gets candid about starting a family at a young age. The 32-year-old mother of three opens up about getting married, starting a family as a young couple, and trying to figure out a career while raising children.

The cookbook author, who married NBA great Stephen Curry in 2011, states on the podcast that it “always felt right” to get married at a young age, but she had to “make a lot of decisions.”

“What I started to realize was I was becoming this woman at such a young age when other people would still potentially be in college or just figuring out who they want to be. I was getting married and having kids and it got to a point when I was like, I’ve spent my whole life since I was a little girl attempting to play these other people and auditioning to be these other people that I don’t even know what I like or who I am because I’ve spent my whole life, trying to figure out how to be somebody else.”

Curry who is mother to two-year-old Canon W. Jack, daughter Ryan Carson, 5, and daughter Riley, 8, “thoroughly enjoyed being a mom,” but she admits that she had to figure out self as well. The Food Network star said she had a “long conversation” with her mom, mother-in-law and husband, stating that she wanted to “take some time” to “take a breath for a second and figure out who I am.”

“It was a very emotional decision. And I did it shortly after that and found out we were having a baby, which wasn’t in the plans quite yet. I always had this feeling of like, I think that there’s a double duty that I could be playing here as I was like, I have hopes and dreams for myself and there’s gotta be a way to do both. I felt this weird bug, like this entrepreneurial bug.”

And as we know, Curry has become a well respected face in the culinary world. She began blogging and sharing her recipes, and things took off from there.

“…it kind of became my career very naturally and organically. And my husband was like, ‘Hey, I think you can do this.’ I was very scared and frightened and gently dove in and now it’s become a whole career, which I love.”

Recently, Curry has expanded her entrepreneurial spirit as she has founded, “Sweet July,” …[a] shop [that] features products for the self and home with a focus on impeccable quality at an affordable price.”

To shop Sweet July, click here. To listen to more of Curry’s Podcast, click here. We cannot wait to see what else she has in store for the future.