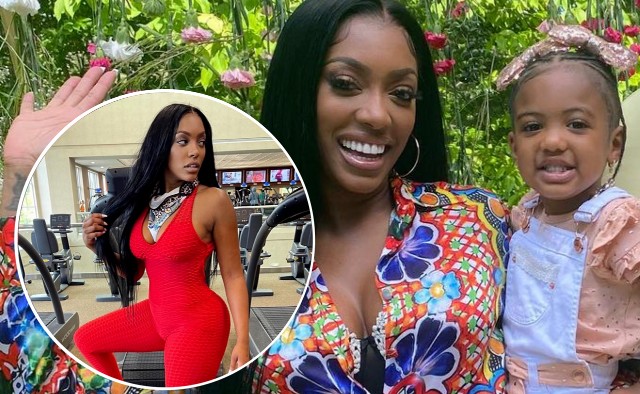 Real Housewives of Atlanta star Porsha Williams has shut down rumors of her being pregnant by showing a photo of her flat stomach on her Instagram page. In the snap, the reality star can be seen posing in a fitted Backless Workout Romper Jumpsuit as she gets ready to work out.

“Welp. This kills the preggo rumors,” one fan commented.

Another challenged, “I love you Porsha but you ain’t fooling us. I know this is an old picture. Show that baby bump.”

To which Porsha Williams responded, “With my new ring sure.”

Williams surprised fans on Monday after she announced that she is engaged to businessman Simon Guabadia after just a month of dating.

She shared, “Our relationship began a month ago—yes we are crazy in love,” Porsha told her social media fans of her relationship with Simon Guobadia. “I know it’s fast but we are living life each day to its fullest,” the RHOA star added. “I choose happiness every morning and every night,” Porsha told her fans. “Tuning out all negative energy and only focused on positive wishes. He makes me so happy and to me, that is what matters most.”

Simon recently filed for divorce from his soon-to-be ex-wife, Falyn Guabadia, in January.

“For all of you that need facts, I get the optics but Simon filed for divorce from a previous marriage in January,” Williams told her social media fans on Monday. “I had nothing to do with their divorce filing. That’s between the two of them,” Porsha wrote.

Porsha also revealed that Simon and her ex-fiance Dennis Mckinley “are committed to being respectful and supportive of my happiness in this situation, as well as being the best co-parents they can be to baby PJ.”

She also shared a photo in which she is standing in between both men while showing off her massive engagement ring. It was this same photo that brought on the pregnancy rumors as Porsha could be seen wearing a lose fitting dress in the picture. Many fans claimed to have seen a bump hiding below the flowy dress and others claimed to have seen her “almost rub her belly” in an accompanying video.

Well, there you have it! Porsha is not pregnant!