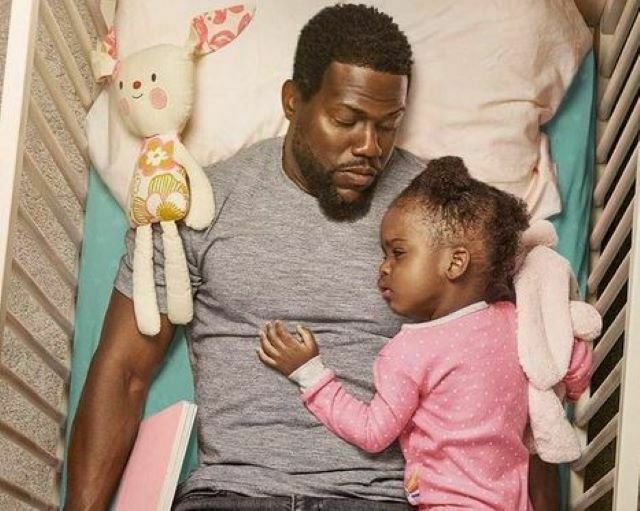 The new trailer for Kevin Hart’s upcoming dramedy Fatherhood, officially drops and it will make you laugh while crying.

“If you could have one parent, I wish you could’ve had your mom,” Hart’s character says, in the trailer. “She would’ve been better at it.”

As he places flowers on his wife’s grave, he adds, “Mommy was the best.”

Hart’s upcoming film is based on the true-life memoir, Two Kisses for Maddy: A Memoir of Loss & Love. The project was adapted for Netflix by Dana Stevens and Paul Weitz, who also directs, under Sony Pictures and the Obama’s Higher Ground.

Back in March, Hart proudly posted about the film on Instagram.

“So excited to announce that my new drama “Fatherhood” will be released on @netflix on June 18th right before Father’s Day….This is a passion project…The movie is amazing….it gave me an opportunity to change the narrative on the “Black Father” stereotype….As a black father I pride myself on trying to be as present as possible in my kids lives…I’m not the only black father that does this….there are so many of us.”

He continued, “Seeing a film like Fatherhood is important as hell. I am also happy to be partnering with President Barack Obama & his wife Michelle Obama’s production company “Higher Ground Productions” …..This is HUGE!!!!! #ComedicRockStarShit #HartBeatProductions #FatherHood #Netflix.”

So, just what is the new film all about? Well, Fatherhood follows the story of a a single dad  who brings up his daughter (Melody Hurd) after the unexpected death of his wife a day after the birth. Alfre Woodard, Lil Rel Howery, DeWanda Wise, Anthony Carrigan and Paul Reiser also star in the film that will entertain audiences with a relatable mix of laughter and the emotional pull of a father trying to do his best to raise his little girl on his own.

According to Deadline, Fatherhood has been a long time coming. Prior to the Coronavirus pandemic, Sony had pushed back the original release date from April 2020 to January 8, 2021. Fatherhood airs on June 18th.

Are you planning to watch? Sound-off and comment below. We want to hear from you!