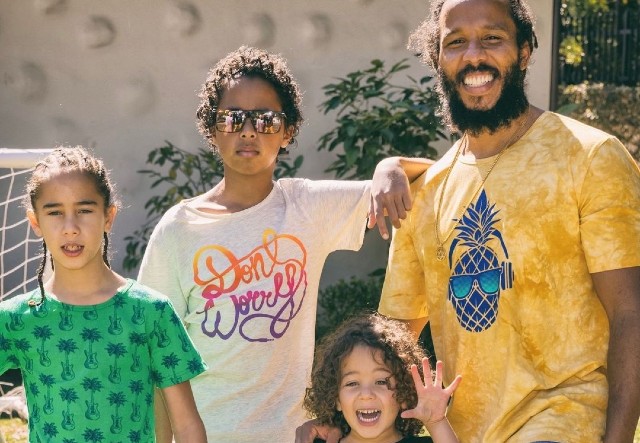 Ziggy Marley and his family has teamed up with Appaman and Nordstrom  to create a seasonal Kids’ clothing capsule collection.

According to press release, “The capsule is made up of graphic tees, knit shorts as well as a woven beach-inspired outfit. The collection resembles Ziggy’s love for music while embodying the colors and feel-good vibes of his Jamaican roots. The collection will launch on April 14th at Appaman.com and exclusive retailer, Nordstrom and Nordstrom.com.”

Ziggy, father of seven and the son of late reggae legend Bob Marley,  released his latest children’s album, “More Family Time,”  last summer after being on lockdown with his kids for most of 2020 due to the ongoing pandemic.

“If it weren’t for me being home and around them, I don’t think that album would have been made,” Marley said during a phone interview. “I think COVID forced us to spend more time together than ever. It also made me realize that kids don’t spend the most time with their parents; they spend it at school. They’re there five days a week and then they have extra activities sometimes on the weekends, so I became aware of like, ‘Wow, when do you have a chance to raise your children? Just before they go to school and when they come home for dinner?’ It put things in better perspective for me and gave me an opportunity to take stock of my relationships with them and see how I could be more involved and help them. All of this definitely opened my eyes a bit more.”

“My Dog Romeo” and “Music Is in Everything”, two of the songs on the album, are being released as picture books with illustrations  to go along with the lyrics to each song. Both books will be published through Akashic Books on July 27 and Nov. 2 respectively, and are available for pre-order.

In addition to releasing two picture books, Marley will be one of the highlights of Nat Geo’s Earth Day Eve 2021 streaming concert on Wednesday. “Any time they call me, I’m there for this. Any time they want me,” he said of the Earth Day concert. “Everything is being done a bit different but we’re still doing it, which is the main point.”