Home » NEWS » SEAN ‘DIDDY’ COMBS DOTES ON HIS DAUGHTERS AND NEPHEW IN NEW PHOTO: ‘MY WHY’

SEAN ‘DIDDY’ COMBS DOTES ON HIS DAUGHTERS AND NEPHEW IN NEW PHOTO: ‘MY WHY’

"My Heart Is Filled With Love" 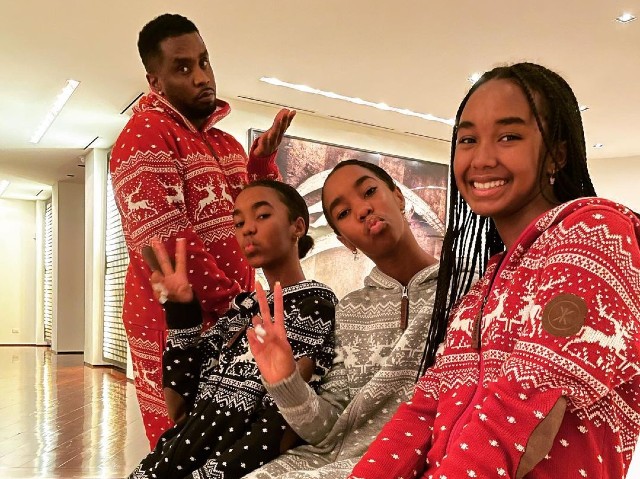 Sean “Diddy” Combs is a doting dad. The entertainment mogul took to Instagram on Friday (Dec. 11) to celebrate his daughters and nephew.

“My heart is filled with love,” Diddy told his social media fans. “My why,” Sean Combs shared in another social media post that showed his daughters with his nephew. Chance, D’Lila, and Jessie were holding up their cousin in the candid while wearing pajamas fit for the holidays.

It has been two years since Jessie and D’Lila’s mother, Kim Porter, passed away from complications caused by lobar pneumonia. Kim’s death came as a shock to Hollywood as she was seen supporting her son at his first Christmas movie debut two weeks prior to her death.

Jessie and D’Lila graduated from middle school last year to which Sean Combs praised their late mother for her influence in their daughters’ lives. “Shout out to Kim,” Diddy wrote to his children’s mother. “They’re graduating baby,” the Hop Hop mogul shared online. “This one’s for you … I mean, this two’s for you.”

Diddy will celebrate Jessie and D’Lila’s 14th birthday in ten days. The girls will officially put another candle on their birthday cakes on December 21, 2020. Last year, Diddy hosted a birthday party to coincide with Kim Porter’s birthday, which is on December 15, 2020, and to better fit into the family’s holiday schedule.