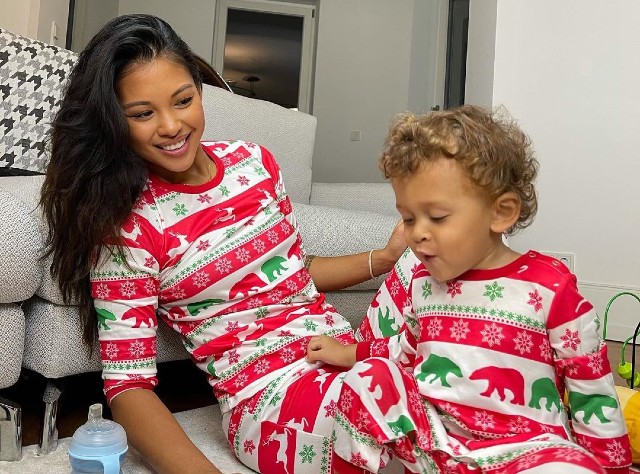 Both Chris and Ammika have taken to their respective  Instagram pages to show off their “Fly Guy” and fans are loving it. In one photo, Aeko can be seen wearing a blue and orange tracksuit. Chris simply captioned the photo, “Fly Guy”.

Brown recently returned from a family vacation in Tulum, Mexico. While down South, thirty-one-year-old R&B artist and his ex marked a milestone for Aeko, his first birthday.

According to a source close to Brown, he is already back to work and truly missing his son.

“Ammika and Aeko are back in Germany so they are doing the long distance thing again, but they FaceTime every day, so they are staying very connected,” the source told Hollywood Life in an exclusive. “It’s hard for Chris to be apart from them, he’s missing them already, but he does need to work so he had to get home. Although the family is apart once again, they definitely have the amazing memories they created in Tulum to reminisce on. The trip was really good for them. They had the time to bond and just spend time as a family and it was good. He’s very happy with how it went and I’m sure he’ll find a way to see them again sooner rather than later.”

In addition to Aeko, Brown is also father to six-year-old Royalty. According to a second source, Brown “…can’t wait until everyone can be together and close. Chris is very happy with how everything has been turning out with Aeko and Ammika,” the second source continued. “He is taking himself as a father as something that is very important to him. He wants to make sure Royalty and Aeko have a solid foundation. Along with that he has to spend time with Royalty just as much Aeko so he is piecing it together along with work. He is happy to be blessed to afford to make it all happen and he will see Aeko and Ammika soon.”

We are definitely ready for the family reunion because pictures of Aeko and Royalty together will unquestionably be cuteness overload.

ISAIAH RUSSELL-BAILEY SET TO STAR IN "WE CAN BE HEROES"

TOP FIVE CHRISTMAS GIFTS FOR THE TODDLER ON YOUR LIST

TOP FIVE CHRISTMAS GIFTS FOR THE TODDLER ON YOUR LIST