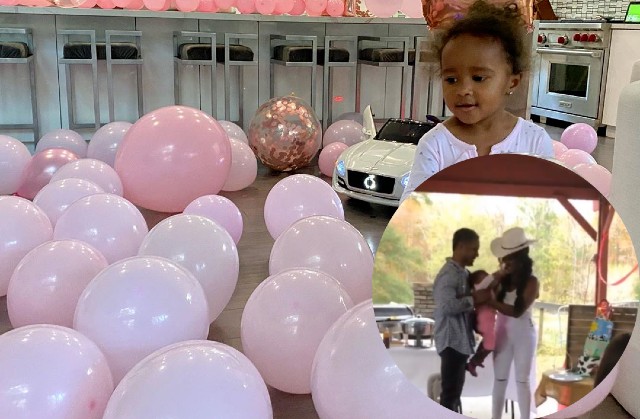 Real Housewives of Atlanta (RHOA) star Kenya Moore reunited with her estranged husband, Marc Daly, to celebrate their daughter’s second birthday this past weekend. The celebrity parents gave their little one a cowgirl themed birthday party, which took place outdoors.

Kandi Burruss and Eva Marcille attended Brooklyn Daly’s birthday bash along with their kids. Eva was filmed while giving Brooklyn a big hug as the youngster greeted fans who could only send positive vibes to the birthday girl. “Good to see Mark Daly in Atlanta For Brooklyn’s birthday party,” one media source posted on Instagram along with footage of Marc and Kenya holding Brooklyn while fans sang the Birthday Song to the toddler.

Kenya Moore and Marc Daly’s marital problems were aired out during the last season of the Real Housewives of Atlanta. Many fans were shocked by what appeared to be a condescending attitude Marc continuously gave his wife. Kenya was surprised with a divorce announcement that Marc shared with the press after the couple’s fight about his charity event. Such plans to separate, however, have been placed on hold indefinitely as Marc and Kenya decided to work on their marriage this year.

“We have been doing great,” Kenya said during an interview earlier this year. “He’s in New York. We FaceTime him every day. Co-parenting is amazing,” the celebrity mom added. Kenya also shared that Marc was in New York more often than not because of COVID-19 and his efforts to keep his restaurant afloat in the midst of a global pandemic.

“It’s hard because it’s been months now and it’s a little sad because he’s not here with us and Brooklyn really misses her dad, so for me, I can’t wait for it all to be over so our family can be reunited,” Moore shared. “We have a lot of work to do and whether or not our marriage survives and everything, it’s only God that knows that,” she added.