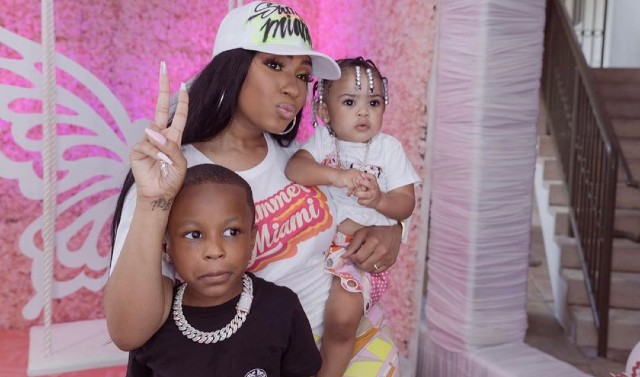 Yung Miami, one-half of the rap duo City Girls with her partner JT, recently celebrated her daughter Summer Miami Luellen’s first birthday, and she spared no expense in celebrating her daughter’s special day.

In a series of angry tweets, Yung Miami recently went off on a fan who accused her of buying hand-me-down designer bags and calling her cheap. Yung Miami clapped back, revealing that she spent $70,000 on Summer’s lavish birthday party. Her tweet reads: “Wtf is 10-18k on a bag that ain’t s–t 😏 Summer birthday party was 70k.”

Yung Miami shares Summer with her ex-boyfriend, producer Southside. She also has a son, Jai Wiggins Jr., from her late ex-boyfriend Jai Wiggins, while Southside has five kids from previous relationships. Summer’s birthday party was held during the weekend of October 16, and it was indeed extravagant (and expensive). Yung Miami posted a bunch of photos from the party on Instagram, showing off the fabulous decor and amenities. She captioned the post: “Summers 1st birthday party 🥳 🍰🌸🦋.”

All eyes were on Summer as she entered the party on a cute little pink Lambo. The party was marked by pink butterfly decorations, plenty of balloons, a custom merch designer, a massive sign that read “SUMMER,” and tables loaded with all kinds of sweet treats. For the children, the party included a large ball pit with “Summer Miami” on the frame, an arts and crafts station, performers on stilts, and a few carnival rides. A child’s birthday isn’t complete without a cake, and Yung Miami had that covered, as the triple-decker cake was beautifully designed with roses made of frosting splitting it down the middle.

Yung Miami, Southside, Jai Jr., and many of their friends and family were all there to celebrate Summer’s special day with her and make it a birthday party to remember.

CIARA, RUSSELL WILSON AND KIDS GO PUMPKIN PICKIN AT THE CRIB-SEE THE VIDEO!