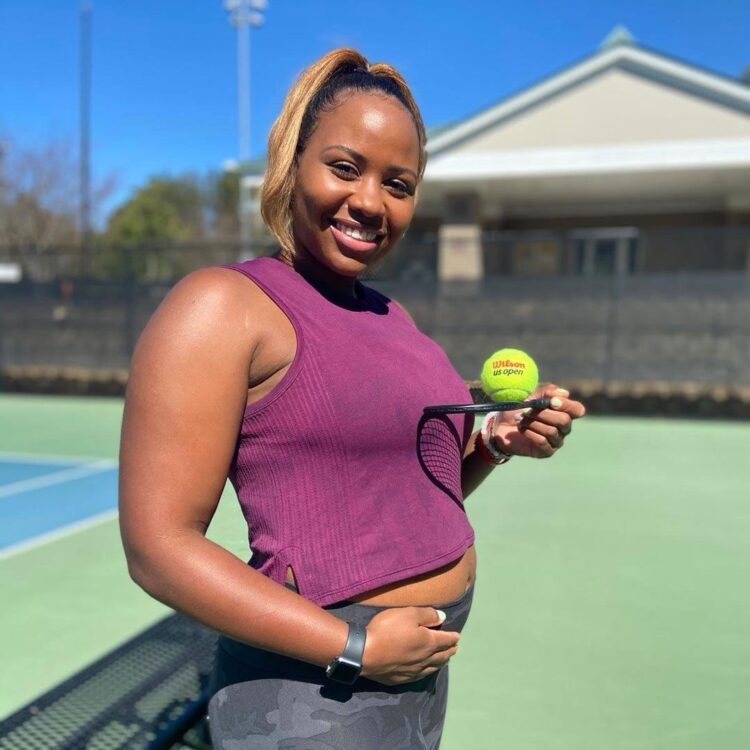 Pro tennis star Taylor Townsend recently shared some exciting news: she gonna have a baby! She took to social media on October 14 to announce her pregnancy, posting a short video on Instagram that celebrated her tennis career and revealed her baby bump at the end, adding that her first child is due in March 2021.

Life has a funny way of putting you exactly where you are supposed to be. I’m so excited to embark on the journey of motherhood!! #babytownsend2021

The video showed old photos and clips of Taylor Townsend as she spoke about her accomplishments and how she fought hard to prove doubters wrong her whole career. “At 4-years-old I was told I would never make it and I should quit,” said Townsend. “At 12 I became the youngest ever to win the Georgia state qualifier. At 15, I didn’t think I was good enough, but I proved myself wrong by winning the junior Australian Open in singles and in doubles.”

“My entire life, my entire career, I’ve heard you can’t, you won’t, and I’ve used it as a reason to fight hard and as motivation to keep playing. I’m sure this won’t be any different, so I’ll have to prove them wrong again,” she continued. “Because now I have the best reason ever to play. You might think what I’ve done so far is impressive, but just wait until you see what I do next.”

Smiling through DatRona and allergy Szn

Taylor Townsend captioned the post: “BIG ANNOUNCEMENT ❤️😱Life has a funny way of putting you exactly where you are supposed to be. I’m so excited to embark on the journey of motherhood!! #babytownsend2021.” Her Instagram bio even reads, “Mom to be.”

At 24-years-old, Taylor Townsend is ranked 90th on the WTA (Women’s Tennis Association) rankings, and she recently competed in the 2020 U.S. Open while pregnant, losing in the first round in the singles, but advancing all the way to the semifinals in doubles alongside her partner Asia Muhammad.

Taylor Townsend says she plans to eventually return to the tour, and she would join tennis stars Victoria Azarenka and Serena Williams as mothers who have returned to the tour after giving birth. Townsend’s rank will also be safe, as the WTA has a rule that freezes a player’s rank if they take time off for pregnancy. This allows Townsend to enter the main draw events when she is ready to return.