Home » NEWS » CIARA AND KIDS CHEERED ON RUSSELL WILSON ON GAME DAY: ‘W FOR THE WIN’

CIARA AND KIDS CHEERED ON RUSSELL WILSON ON GAME DAY: ‘W FOR THE WIN’ 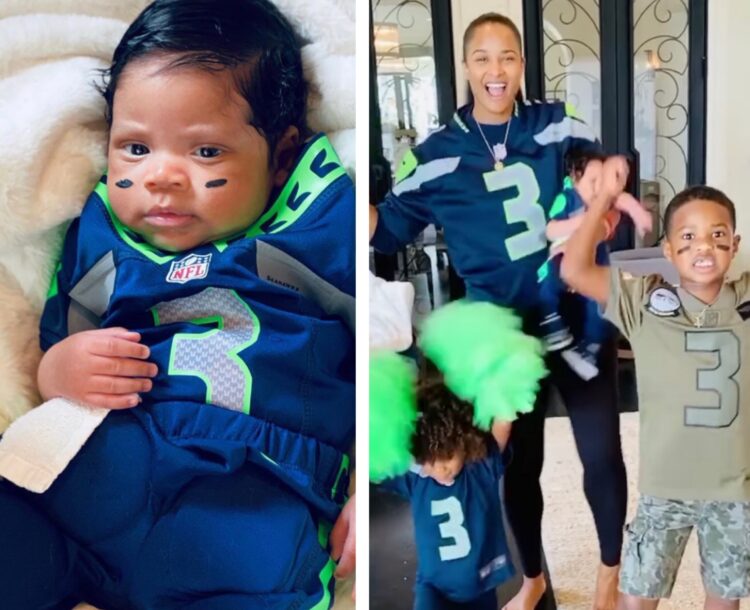 Quarterback Russell Wilson of the Seattle Seahawks may not be playing in a packed stadium this season, but he has the support of his most important fans right at home cheering him on; his wife Ciara and their kids, 6-year-old Future Zahir, 3-year-old Sienna, and 1-month old Win Wilson.

The NFL 2020 season kicked off on September 10 to start Week 1, and September 13 was “NFL Sunday” when the majority of Week 1 games are played. Russell Wilson’s season began on “NFL Sunday” with his Seahawks taking on the Atlanta Falcons in Atlanta, Georgia. Due to COVID-19 concerns, there weren’t any fans in the stadium, but Ciara and their kids recreated the stadium vibe to support Russell.

On Instagram, Ciara posted a GIF of herself, Future Zahir, Sienna, and Win each wearing Wilson’s no. 3 Seahawks jersey and cheering with pom-poms. She captioned the post: “Bringing the stadium energy to the house! 💃🏽 #Gohawks!!”

Ciara also honored her husband with a picture of him in his Seahawks gear with her caption reading: “Season 9. So proud of you babe @DangeRussWilson! Hardest working man I know. Seeing your daily dedication and commitment to the game continually motivates and inspires me! Best 2 Ever do it! #3 The Best is Ahead! Let’s Go @Seahawks! Let’s Go! #GameDay 💙💙💙💚💚💚.”

Russell Wilson answered his family’s cheers with an excellent performance, throwing for 322 yards and four touchdown passes as he led his Seahawks to a 38-25 victory over the Falcons. “Russell was in total command of the game,” said Seahawks head coach Pete Carroll.

Ciara celebrated Russell’s win with a couple of adorable pictures of Win wearing his father’s jersey. The caption read: “Had My 1st Game Today and I’m Feeling GOOD. 😉 W for the WIN! @DangeRussWilson.”

For Week 2, the Seattle Seahawks’ will take on the New England Patriots in their home opener on September 20.