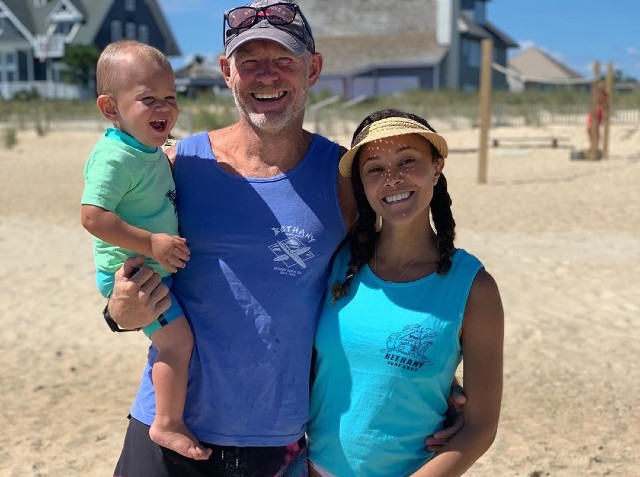 RHOP star Ashley Darby is pregnant and expecting her second child with her husband, Michael Darby! The celebrity couple announced their expectancy on Tuesday (September 8).

The Darbys used their son, Dean Darby, to make the big announcement. “Dean has an announcement to make,” Ashley and Michael shared in a video clip. “Baby D2 arriving February 2021,” the Real Housewives of Potomac (RHOP) star and her husband revealed.

There’s no hiding this big belly anymore! We are elated to share our news with you! To say we are thankful is an absolute understatement ♥️ #RHOP

Ashley and Michael Darby welcomed their son last year. Dean celebrated his first birthday in July. “What a magical day,” Ashley exclaimed on Instagram after giving her son a cute party in commemoration of his first birthday. “Our sweet Dean turned 1 today, and we were so blessed to spend time with our loving family,” the RHOP star said.

“Thank you all for sending us well wishes,” Ashley wrote to her fans. “This child is the most incredible human Michael and I could’ve been blessed to guide.”

The end of an era ♥️ thank you to all of our wonderful neighbors who made living in Breakwater Beach such a fun experience, and helping to create the best memories with Dean this summer. We are so blessed to have been able to spend this time as a family in the beautiful city of Bethany Beach, and now we are closing this chapter. Our community will always hold a special place in our hearts 💕 #RHOP #nextchapter

Ashley Darby discussed the lessons she has learned from motherhood during a recent interview with Bravo. “Dean has taught me a lot, mostly about patience,” Ashley revealed. “And he is having a growth spurt I think right now because this is the second bottle that we’ve had to feed him in less than two hours,” the RHOP star said of her son’s development at the time.

“For breastfeeding moms, you know this liquid gold, it can be a little hard to come by that quickly,” Darby admitted. “So, I think this growth spurt is really going to test us, but we’re always going to come out on top.”

What a magical day 🥰 Our sweet Dean turned 1 today, and we were so blessed to spend time with our loving family. Thank you all for sending us well wishes – this child is the most incredible human Michael and I could’ve been blessed to guide. Happy 1st birthday Deano! 🎉🎉 #DeanMichaelDarby #rhop #sweetbaby #1stbirthday

CIARA TEAMS UP WITH GOOD DIAPERS FOR A GOOD CAUSE

CIARA TEAMS UP WITH GOOD DIAPERS FOR A GOOD CAUSE