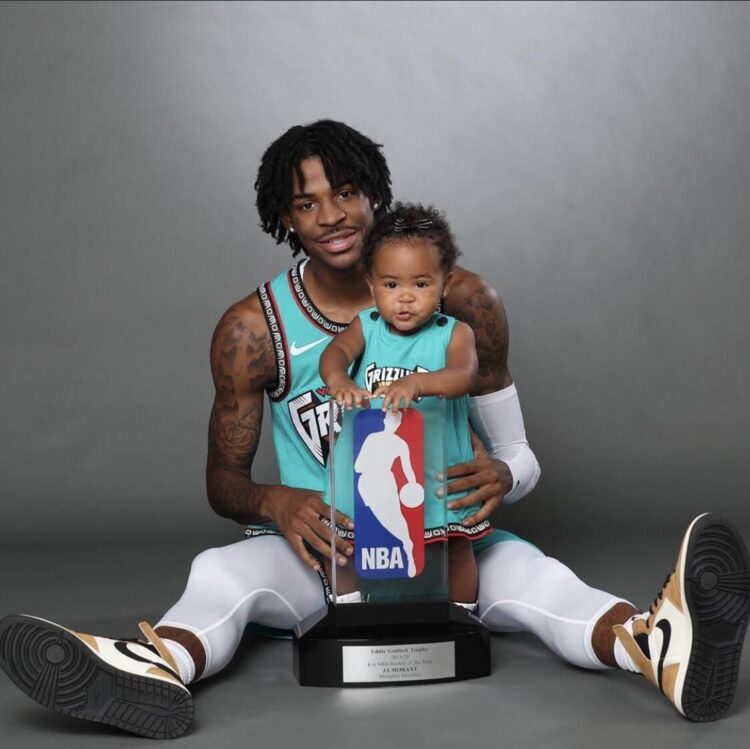 Memphis Grizzlies star Ja Morant won the 2019-20 NBA Rookie of the Year (ROY) award on Thursday (September 3), and he celebrated his achievement with his adorable daughter, 1-year-old Kaari Jaidyn Morant.

On Instagram, the Memphis Grizzlies posted a cute video of Ja Morant dancing in celebration of his award with little Kaari, who he shares with his girlfriend KK Dixon. The video was captioned: “Daddy Daughter ROY Dance 💙🏆@JaMorant #KiaROY.”

Happy 1st Birthday to my beautiful princess. 👑 I love you so much & will do anything to keep a smile on your face. I’m soooo thankful & blessed to be your father. 🙌🏽 No matter what you do or say you can always depend on my support, love, & guidance. Daddy will always protect you & make sure you never want for anything. Enjoy your day babygirl 😘 Daddy miss you & love you 🖤

During the 2019-20 NBA season, Ja Morant shot 47.7 from the field and averaged 17.8 points per game and 7.3 assists per game, leading all qualified rookies. Morant led his Grizzlies during the eight seeding games to the play-in-tournament against the Portland Trail Blazers for the eighth and final spot in the 2020 NBA Playoffs, though they were defeated 126-122 in their play-in game.

Despite the season not ending as he hoped, Ja Morant was proud to accept his ROY award. “Man, it’s a blessing,” Morant said on TNT’s “Inside The NBA” pregame show. “I’m definitely honored. I put a lot of work in, day in and day out. This journey has been rough but, you know, at the end, it’s all paying off. I still have a lot more work to do, but for guys, kids who are not heavily recruited right now, this gives them a lot of hope.”

Ja Morant also had a message for the one voter who didn’t give him a first-place vote. “I want to shoot a direct message to them and thank them for motivating me, even more, to do more on the floor and be better and do whatever I can to help my team in a basketball game,” says Morant. “So if anyone knows who that is, let me know.”

MASIKA KALYSHA COMES TO BLOWS WITH HAZEL-E OVER DAUGHTER