‘THE ONE AND ONLY IVAN’ IS NOW AVAILABLE ON DISNEY+

See The World From A Different Perspective 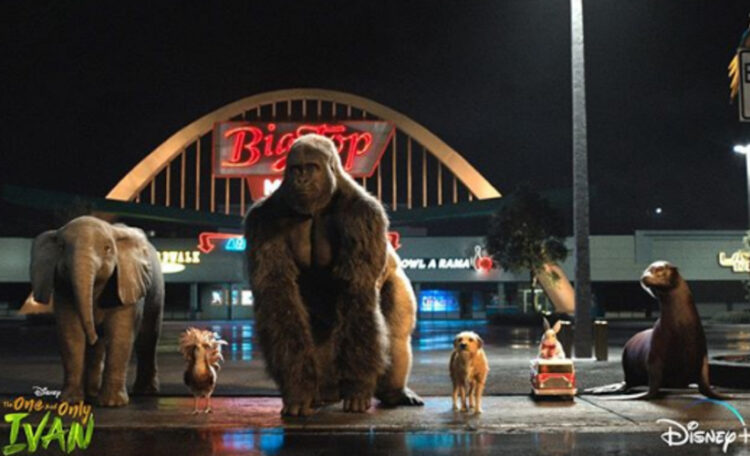 The One And Only Ivan has officially come to the Disney+ platform. Parents and children can sit down together to watch a film that tells the story of a gorilla, Ivan, who finds his way back home in the jungle after a lifetime of being in a strange and distant land.

The land is not as strange for Ivan (Sam Rockwell) as one would think. The gorilla was, after all, taken from his home at a very young age and brought to live in a circus located in a city mall. Something awakens in Ivan, however, when a young elephant named Ruby (Brooklyn Prince) is brought in to save the circus from financial hardship. The circus ringleader, Mack (Bryan Cranston), aims to save his business with the introduction of fresh talent. Ivan, however, begins to remember his life in the wild with Ruby’s arrival, which leads to the discovery of talents within the gorilla as well as new friendships.

The One And Only Ivan is the movie adaptation of the award-winning book by Katherine Applegate. The fictional author got the idea from a news story about a gorilla living in a mall in Tacoma, Washington, for 27 years before being returned to the wild.

“I still remember the headline,” says Applegate. “It read ‘A gorilla sulks in a Tacoma mall as his future is debated.’ And I was astounded that: A.) that there was a gorilla in a mall; and B.) that he’d been there for 27 years.”

Applegate did research on the gorilla before letting her imagination take over when writing the tale. The One And Only Ivan is ultimately the story of Ivan as told by the gorilla himself, which is something that the film’s voiceover talents wholeheartedly appreciate.

Both Chaka Khan, who is the voice of Henrietta in the film, and Angelina Jolie, who is the voice of Stella, understand the creative process and the importance of giving every element in life attention. “I think my creativity is my kids,” Angelina said during a recent press conference. “Just watching each of them become uniquely who they are and being around it and going into each of their, whether it be their rooms and talking to them or developing helping them develop,” the celebrity mom added.

“It’s another world,” Chaka Khan agreed. The legendary recording artist experienced life through the eyes of her 11-year-old grandson for a moment during a recent babysitting adventure.

“We’ve been watching Avatar all freaking night,” Chaka shared. “One of the people in the [film], the cartoon character is Katara who I like very much. And she was talking to her father who had left her when she was very young. And [my grandson] had the same experience. And so, when his father came on and said, ‘I’m sorry but I had to leave you. I had to go off to war to fight. But every minute and every night I thought about you and-and your brother.'”

It was during that scene in Avatar that Chaka Khan realized the power of storytelling for kids. Her grandson gained a better understanding of why his father, who did not reside with his mom, was not always present. “When art gets it right,” Angelina said. “When creativity gets it right,” she added.

You can see everything that is good and right about Ivan’s story when you stream The One And Only Ivan on Disney+. Stay tuned for more summer films!