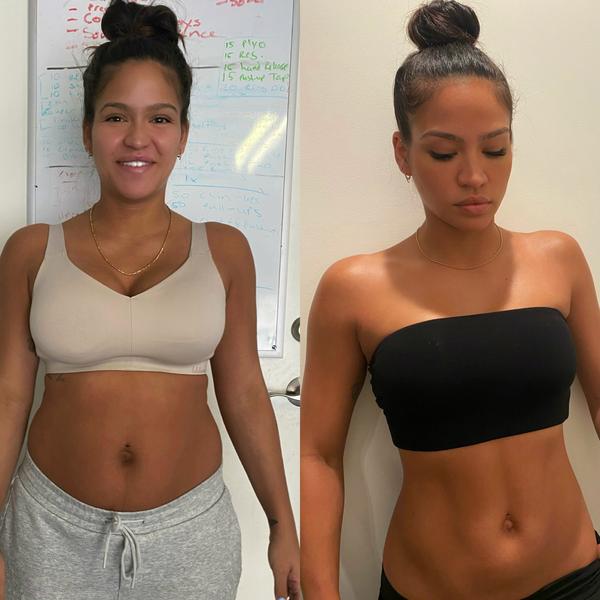 Singer Cassie Ventura recently opened up about her struggle to lose her post-baby weight following the birth of her 8-month-old daughter Frankie Fine in December 2019.

In a recent blog post called What Healthy Looks Like for Me, Cassie Ventura revealed that she gained a “total of 60 lbs” while she was pregnant with Frankie, who she shares with her husband Alex Fine. Gaining the weight already had “negative physical effects” on Cassie’s body, but her struggle to lose her post-baby weight was even worse.

Cassie Ventura’s blog post began with her sharing a before-and-after photo of herself during her 30-pound weight loss journey over about seven months, which she described as a “confusing and depressing” ordeal. She was even hesitant to let her husband take photos of her because she “didn’t even recognize” herself “looking in the mirror.”

Cassie Ventura then explained how her post-pregnancy journey began. “I lost 20 lbs within the first couple of weeks which I was told was normal and then another 10 gradually over the next 2-3 weeks. I started to workout when I had a goal of 30 lbs to go and when my doctor cleared me to. I went pretty hard at first. By mid-March, I was down another 15 and feeling pretty good. I had a bit of unexplained anxiety, but I was able to work through it, and down another 15 meant I only had 15 lbs to go to get back to my pre-baby weight.

However, it didn’t last long, as Cassie gained the 15 pounds back in two weeks and “was right back to where I started.” After getting bloodwork, it was discovered that she had postpartum thyroiditis. “Basically my thyroid was hyper for a short period (hence the anxiety and weight loss) and then slowed down causing me to gain weight back,” she explained. “From what my doctor told me it’s not super common. About 5-10% of women experience it within the first year after childbirth.”

“The next 3 months following were confusing and depressing, to say the least. I changed my diet paying attention to things that I reacted negatively to (ie, bloating).  I actually started roughly following an autoimmune diet (AIP) in fear that my thyroiditis would turn into Hashimoto’s Disease (an autoimmune disorder). I had completely lost my mind, but I’m glad that I did,” she continued. “I needed to understand what was happening with my body. I went from creating and bringing life into this world to trying whatever I could to get back to feeling like myself again. It wasn’t about my weight anymore, it was about being happy,  feeling good, and not developing a disorder I’ve never heard of,” said Cassie.

During those difficult three months, Cassie Ventura would work out inconsistently, but she credits her husband Alex (who is ironically a personal trainer) for keeping her on track and making sure she stayed consistent. “Truth be told, Alex spent those months in quarantine with me trying to drag me out of my slump to workout because he wanted me to be happy again, but more often than not I didn’t budge,” she recalled. “I finally started working out 2-3 times a week and I’ve gradually moved up to 5-6.”

Following that three-month difficult period, which Cassie Ventura described as “discouraging,” her thyroid “finally regulated.” Now Cassie is healthy and says she’s even better than before she was pregnant. “Today I’m in better shape than I was before the baby. I honestly don’t think I’ve ever been in this good of shape.”

Cassie Ventura chose to share her story to help women who are dealing with weight issues as she did, with the reminder that “no two weight loss/get fit stories are the same.” “As women, (not all of us, but a decent amount) we put so much pressure on ourselves to look a certain way when I think what we should be focused on is our overall health and happiness,” says Cassie. “Whatever your goals are, choose to be healthy. For me, this is what it looks like when I’m taking care of myself. This is what healthy looks like for me.”