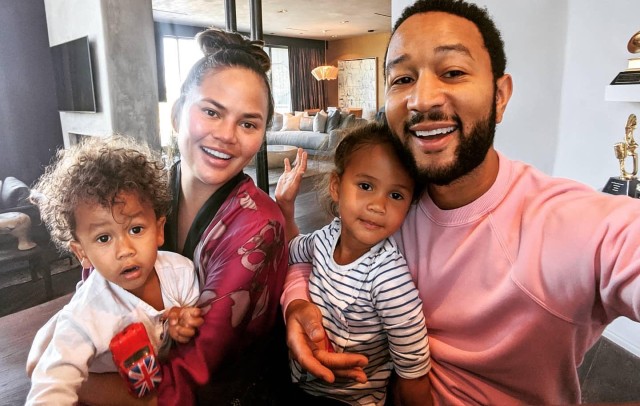 Confirmed (11:50 PM): Chrissy Teigen confirmed her pregnancy on Instagram Stories on Thursday (August 13). The model cradled her protruding stomach while telling fans that she and her husband, John Legend, were expecting baby number three. Congratulations again to the happy couple!

Someone (@chrissyteigen) broke the news first, but the new music video for #Wild is out this Thursday! We'll be live streaming just before at 12pm PT – set a reminder, link in bio.

Speculation regarding Chrissy’s pregnancy began immediately after the model’s husband released the music video for his new single, ‘Wild.’ Fans could not help but to notice what appeared to be a baby bump in several scenes of the video. It is was not until inside sources confirmed Chrissy and John’s expectancy that the rumors began to solidify themselves.

Big day! The video for “wild” premieres tomorrow! John and I will be introducing it live at noon pacific on YouTube. Let us know if you have any questions for us or our director @nabil, the man who introduced us 14 years ago! Link in bio!

John Legend and Chrissy Teigen are already the doting parents of a son, Miles, and a daughter, Luna. The celebrity mom has been very transparent about her experience with postpartum depression after giving birth to her daughter.

we don’t get to go to the store often but if there’s time for a late night Ralph’s run, boy we make the most of it.

“It was a sad existence,” Chrissy said during a recent interview with Glamour. “There were no highs. It was a flatline of life for a few months,” Teigen shared. “You hear these horrific stories of people not seeing their child as theirs, or wanting to hurt them, and I never felt that way. That’s why I put off getting it checked as I hated myself, not my child.”

Teigen did ultimately see her doctor and received treatment for depression. The celebrity mom was better prepared to handle her hormonal changes after her son’s birth.

Chrissy Teigen and John Legend have yet to officially confirm their expectancy. Stay tuned for more celebrity family news!