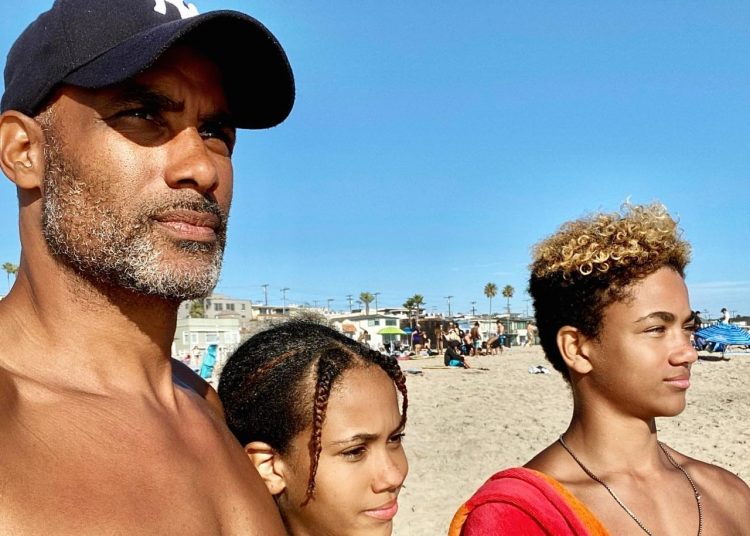 Actor Boris Kodjoe, his wife, actress Nicole Ari Parker, and their kids, 15-year-old Sophie and 13-year-old Nicolas Kodjoe, are doing their part to fight COVID-19 with the #HelpOurHeroes initiative.

Boris Kodjoe plays a firefighter on ABC’s hit show Station 19, but with his wife’s apparel company Gymwrap, he is giving back to First Responders with the #HelpOurHeroes campaign. For every Gymwrap mask sold, they donate masks to Frontline and Essential workers who need them. “We’ve given away almost half a million masks to Essential workers so far,” said Kodjoe in an interview with ET. “To the real heroes of this country.”

Boris Kodjoe gives Nicole Ari Parker the credit for their campaign in an interview with Sara Gore on NBC’s New York Live, saying it was her idea. “My wife actually deserves all the credit,” says Kodjoe. “My wife, who has been manufacturing Gymwraps for years said: ‘You know what, we can pivot and we can start manufacturing masks right here in Southern California.’ So we did and she came up with these amazing, washable, reusable soft masks that people have been loving.”

Boris Kodjoe’s kids have also been involved in the #HelpOurHeroes initiative and he says that they are “really excited about it.” “There’s people who help you out, such as bus drivers, medical workers, construction workers, sanitation workers, so we’re giving back to that circle,” says Nicolas.

Kodjoe explained that launching the #HelpOurHeroes campaign amid the COVID-19 pandemic not only brought his family closer, it also gave them “an opportunity to have these conversations and the dialogue that needs to be had with children at these difficult times,” said Kodjoe. “Whether it’s talking about the pandemic, or talking about the social unrest and social justice and equality issues we’re dealing with right now.”

“Our children are smart,” says Kodjoe. “Children in general, are smart, and parents need to have those conversations with their children because that’s the only way to ensure that our children become part of the solution.”

Christina Milian is under fire for covering her son Isaiah Pokora's face while leaving her...

NBA legend Dwyane Wade and his wife, actress Gabrielle Union were both honored with spots...

Police brutality has plagued generations of African American men and women for centuries. Twenty-twenty has...

When he was 10, Ziggy Marley would sit in on recording sessions with his father,...