FANS REACT TO BLUE IVY SINGING IN “BLACK IS KING” 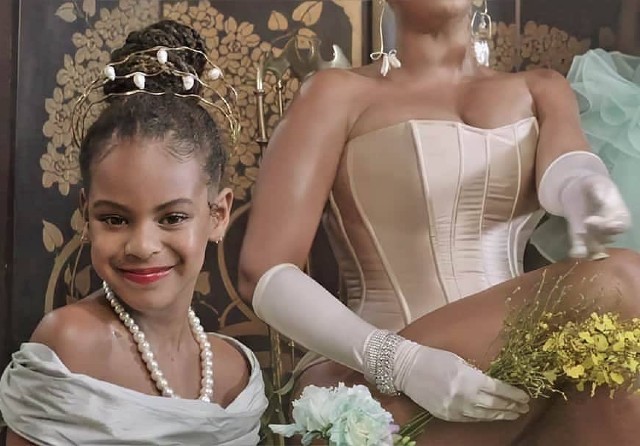 After weeks of teasing her new project, Beyoncé finally dropped Black is King on Disney+ at midnight on July 31st. Well, the visual album is definitely the gift that we all needed in 2020 because not only does it take us on narrative journey through the gorgeous and rich African landscape and culture, not only is it the perfect follow-up to her 2019 musical release Lion King: The Gift, but, it gives us another opportunity to see Blue Ivy slay in her own spotlight!

In addition to singing, the talented eight-year-old made several cameos throughout the film, also showing off her own dance skills.

However, Blue Ivy wasn’t the only Carter to put in appearances. Her three-year-old siblings, twins, Rumi and Sir, can also be seen in the film, in addition to father/husband Jay-Z. Yet, those aren’t the only notable faces that are a part of this amazing project. Naomi Campbell, Pharrell, Jessie Reyez, Lupita Nyong’o, Tiwa Savage, Tierra Whack and numerous other Black and African actors/musicians all show up for Black is King as well.

If you need a refresher, here is the official audio of Brown Skin Girl.

So what are fans across the internet saying about Blue Ivy’s new rendition of Brown Skin Girl for Black is King? Take a look at a few comments below:

Imagine singing better than Beyoncé in her own film, Blue Ivy can relate #BlackIsKing https://t.co/v8Ri7hdmBo

there was just something about seeing blue ivy singing this on my screen #BlackIsKing pic.twitter.com/C2I5h9RAjz

Blue ivy singing brown skin girl in #BlackIsKing made me wonder where her album is at?

We have to agree with @purpaset, when is Blue Ivy’s own record going to drop? What did you think about Blue Ivy making the spotlight hers in Black is King? Sound-off and comment below. We want to hear what you think!

FOLAJOMI "FJ" AKINMURELE STARS ALONGSIDE BEYONCE IN "BLACK IS KING"