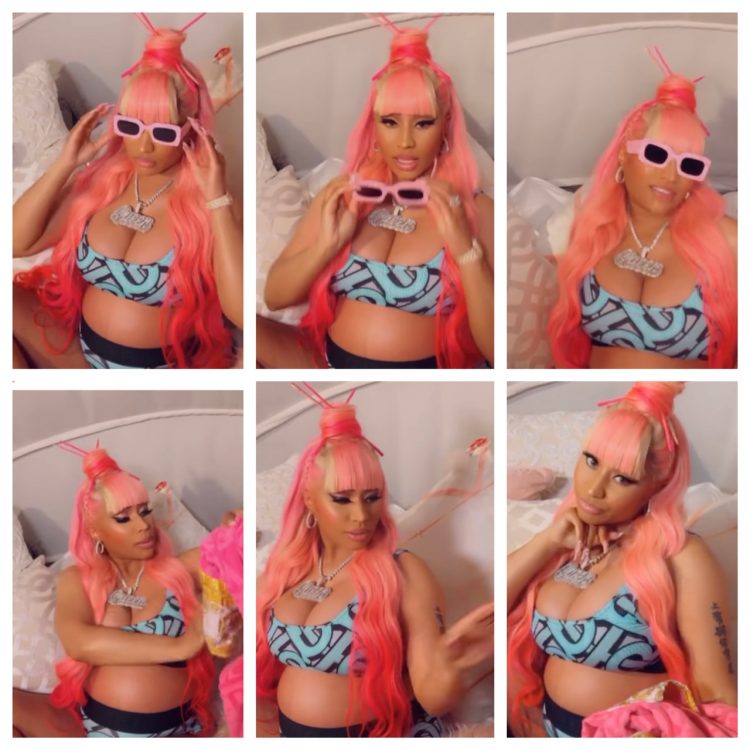 Pregnant Nicki Minaj is ready to slay. The rapper recently showed off her baby bump while promoting her new song, ‘Move Ya Hips.’

In the clip uploaded to Minaj’s Instagram account, Nicki mouthed the words to her song while giving the camera fierce attitude. The pregnant star’s hairstyle further amplified the lyrics of her song as Nicki was able to point to her strawberry colored hair that included bangs and braids on both sides.

“You look so beautiful,” one fan said upon watching the clip of Nicki Minaj promoting her new song. The social media follower went on to tell the expectant star that she was “glowing.” Another Instagram fan wrote, “Pretty and preggo, period.” Indeed!

Nicki Minaj confirmed her pregnancy a few weeks ago. The announcement came nearly two weeks after fans saw Tekashi 6ix9ine’s ‘TROLLZ’ music video that featured Nicki. Many who watched the video were convinced of Minaj’s expectancy upon seeing the rapper’s protruding stomach. Still, things were not official until Nicki officially confirmed her family’s expansion.

This will be Nicki Minaj’s first child with her husband, Kenneth Petty. It was just a few days ago that Petty filed for an adjustment to the terms of his release so that he could be with his wife during her labor and delivery experience. According to The Blast,

“Kenneth Petty is asking a federal judge to change his current ‘release conditions’ after he realized if Nicki gives birth after hours, he would not be allowed to accompany her to the hospital.”

Love. Marriage. Baby carriage. Overflowing with excitement & gratitude. Thank you all for the well wishes. 💛

Nicki Minaj will give birth to her and Kenneth Petty’s little one in the coming months. Stay tuned for more celebrity pregnancy news!