CHRIS ROCK GETS FIRST TATTOO AT AGE 55 WITH HIS DAUGHTERS 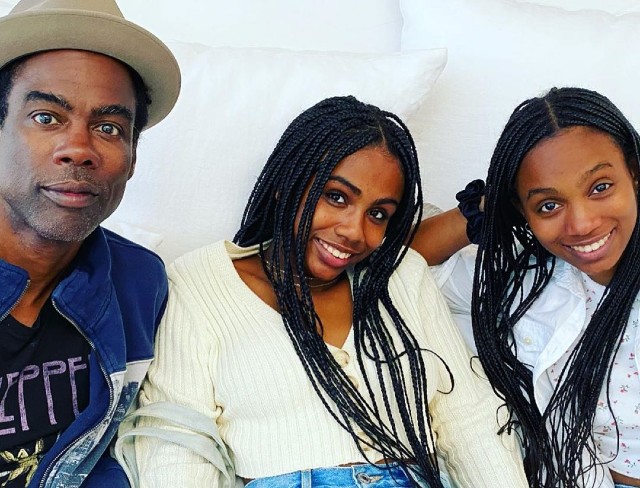 One thing that legendary comedian Chris Rock had never done during his career was to get a tattoo. That is until July 15, when he and his daughters, 18-year-old Lola and 16-year-old Zahra Rock, were seen at a tattoo parlor, where Rock got his first tattoo at the age of 55.

Bang Bang Tattoo, an NYC tattoo parlor that has inked celebrities such as Vanessa Hudgens, Justin Bieber, and Rihanna, announced on Instagram that Chris Rock stopped by to receive his first piece of body art, which was a Jean-Michel Basquiat crown on the front of his right shoulder; a fitting choice for a comedy king. Rock’s daughter Lola got a similar tattoo, a dinosaur wearing the Basquiat crown, on the back of her right shoulder. The post was captioned: “First tattoo for King @chrisrock and his wonderful daughter. Thank you for the trust 🤝 #basquiat.”

Chris Rock and his ex-wife Malaak Compton-Rock share Lola and Zahra, along with their adopted daughter, 11-year-old Ntombi from South Africa. Though their marriage ended after 18 years in 2016 with a messy divorce, Chris and Malaak are on relatively good terms and they co-parent their kids together. Lola’s new tattoo makes for an excellent gift, as she recently graduated high school and celebrated her 18th birthday. Her mother celebrated with an emotional Instagram post, showing off sweet throwback photos of her.

“My firstborn child Lola Simone has graduated from high school and turned 18! I cannot believe we have reached these milestones! But I could not be prouder of the young woman she has become and am excited for her to begin university in Europe,” Malaak captioned the post. “I am so excited to parent her through this next phase of life. She is an extraordinary human being and I love her so!”

Chris Rock recently celebrated Father’s Day (June 21, 2020) with his daughters in Malibu, California. Rock posted a couple of photos with them on Instagram, and he captioned the post: “Nothing makes me happier than my girls. Happy Father Day to all the dads out there. Tonight we get the big piece of chicken.”

GABRIELLE UNION, DWYANE WADE, AND THEIR "BOSS BABY" ENJOY SOME FUN IN THE SUN

GABRIELLE UNION, DWYANE WADE, AND THEIR "BOSS BABY" ENJOY SOME FUN IN THE SUN