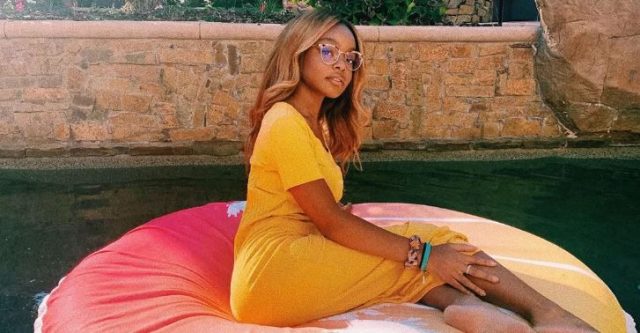 When you are in the public eye, public scrutiny and critique is a given, a fact that Black-ish star Marsai Martin knows very well. Recently, the young fifteen-year-old star had to set the public record straight about her new look at the BET Awards when internet users had something not so nice to say about her appearance.

According to the teen, people did not approve of her “…grandma’s wig” and her teeth, which many suspected to be dental veneers.

“I’m sorry to anyone that I offended or haven’t gotten to your expectations about how I’m supposed to be,” Martin said in an Instagram video, seemingly tearing up in front of the camera. “I apologize. I never want to hurt anyone’s feelings or have anyone worried about what my decisions are.” Then, she pulled out a $100 bill to wipe her tears.

Then the young media mogul said, “Ya’ll, we are in quarantine, and we’ve got more things to focus on than just my hair,” she said. “Justice for Breonna Taylor.”

And of course, there were many comments in support of Martin’s post. The Game star, Gabrielle Dennis wrote, “The unbothered apology tour.”

Janelle Monae commented, “My cousin is better than y’all.”

And, superstar Michael B. Jordan simply posted an emoji: “🤧.”

After Instagram, Martin took her case to Twitter and said in a tweet, “Sorry some of y’all don’t like my hair. Or teeth…which are my actual teeth btw. Good thing I don’t put my effort into trying to please everyone. I like it. Chile I’m 16 this year, let me live. I’m trying to stay sane in quarantine.””

What do you think of Martin’s response to her critics about her hair and teeth? Sound-off, we definitely want to hear what you think on this hot topic!

PHAEDRA PARKS HAS 'DIFFICULT CONVERSATIONS' WITH HER CHILDREN ABOUT RACISM

PHAEDRA PARKS HAS 'DIFFICULT CONVERSATIONS' WITH HER CHILDREN ABOUT RACISM