RAY ALLEN IS TRAINING HIS KIDS ON HOW TO BE CLUTCH 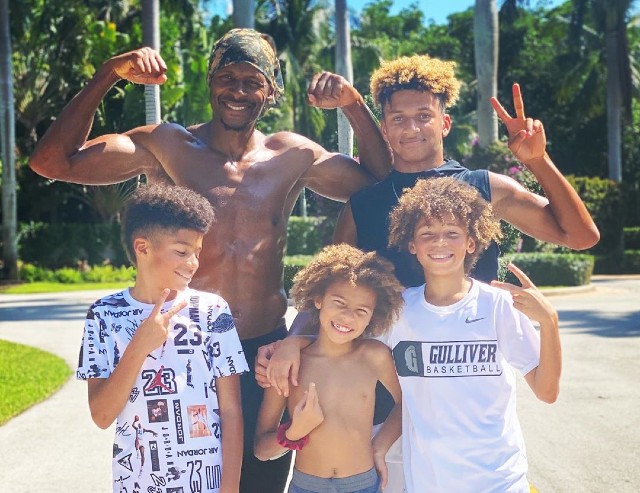 NBA legend Ray Allen was known for his clutch shooting during his epic career and on Father’s Day (June 21), he trained his children on how to be clutch as well.

On Father’s Day, Ray Allen posted a video of himself coaching two of his five children as they went through shooting drills. To simulate tough settings that require clutchness, Allen had his kids take 10 free throws and if they didn’t make 70% of their shots, they had to run.

Ray Allen’s coaching worked, as his kids respectively made seven and eight of their free throws, but Allen wasn’t completely satisfied. “That’s still not good enough, but we’ll start with that,” he said.

Ray Allen and his wife, Shannon Walker Williams, have four sons together: Walter Ray Allen III (born 2004), Walker (born 2006), Wynn (born 2009) and Wynstan Ryan Allen (born 2012). Allen also has a daughter, Tierra Allen, with his ex-girlfriend Rosalind Ramsey. For Father’s Day, Allen posted a picture of all five of his kids shooting on a hoop wearing his jerseys. In the caption, Allen wrote about how proud he was to be a father and wished dads everywhere a Happy Father’s Day.

“How much money you have or what job you work is not success. Raising great kids is the best sign of success in our lives. They are the first glimpse into what the future looks like and looking at these 5 incredible souls in this photo shows me that the future looks amazing. I am so honored to be the dad of these 5 awe-inspiring souls,” wrote Allen. “Thank you for choosing me to be your dad! Thank you @swalkerwil for going halfsies with a brother😜. Happy Father’s Day to all the dads in the world and also I want to send a special shout out to all the incredible women out there that have to be Dads too; Happy mom Father’s Day to you all! #34 #20 #12 #from3 #greatnessintraining #theygotnext #watchtheprocess.”

CIARA SHOWS OFF GROWING BABY BUMP AS SHE NEARS DUE DATE

MEET KEVIN DUKES, THE FOURTEEN-YEAR-OLD WITH A BIG VOICE ON "AMERICA'S GOT TALENT"

MEET KEVIN DUKES, THE FOURTEEN-YEAR-OLD WITH A BIG VOICE ON "AMERICA'S GOT TALENT"