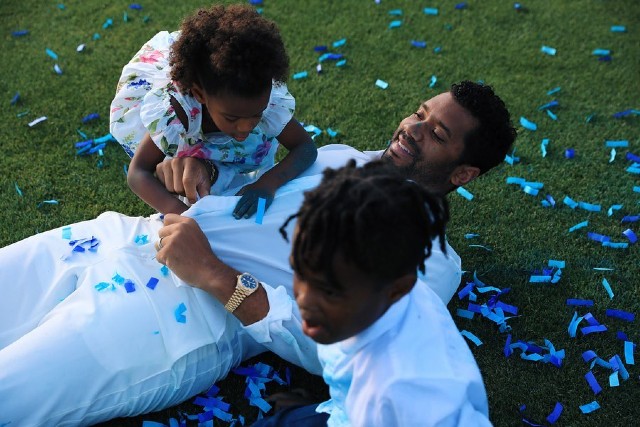 Seattle Seahawks quarterback Russell Wilson, a proud Black father of soon to be three kids, recently released a statement saying that he fears for his children’s lives due to their skin color.

Russell Wilson shares his stepson, 6-year-old Future Zahir and his 3-year-old daughter Sienna Wilson with his wife Ciara and is expecting a third child soon. In a powerful statement posted to his Instagram page, Wilson spoke about how he fears for his children’s lives because of “the color of their beautiful chocolate skin.” He also called for an end to police brutality and institutional racism.

Russell Wilson’s statement comes weeks after the tragic murder of George Floyd, a Black Minnesota resident who was murdered by Minnesota Police on May 25 after an officer knelt on his neck for several minutes. Four officers were fired for Floyd’s murder and the former officer who was filmed with his knee on Floyd’s neck has, along with the other three former officers, since been charged with murder and manslaughter. Following Floyd’s death, protests against police brutality and systemic racism have spread around the country and the globe. Wilson’s statement reads as follows:

“My heart hurts. Pain. Frustration. Outrage. Sadness. I remember my dad and grandfather telling me vivid stories of the 50s and 60s regarding the brutal acts of violence inflicted upon Blacks. It seems that we have been thrust back to those horrific events all over again in 2020. The reality is the past has never left us. As I’ve been thinking about what to say, I realized there are no words that can alleviate the hurt and pain over the senseless deaths of George Floyd, Ahmaud Arbery, Breonna Taylor and so many others.”

“As a stepdad to one of the most amazing kids I’ve ever known, a young boy with so much passion, talent, intelligence, and love for others; as a father to one of the most bright, brilliant and vibrant young girls in the world and a new baby boy on the way … I fear. I fear for their lives just like my grandmother feared for my dad’s life and the lives of other children. I fear because of the color of their beautiful chocolate skin.”

“We cannot continue to ignore racism as though it has ended or never happened. The continual violence inflicted upon Blacks and People of Color must stop. We need a change now. We need love. We need compassion. We need grace and forgiveness even in the midst of the pain. We need true leadership. We need justice. We need equality. The video of George Floyd broke my heart. Seeing someone’s life being taken so cruelly makes us want to rage and lash out. But then I ask myself, what would George Floyd want? He told us. He just wanted his mother. He wanted his life. He simply wanted to breathe. Ahmaud Arbery simply wanted to go on a run. Breonna Taylor wanted a peaceful night at home. Dr. Martin Luther King, Jr., wanted us to have a dream.”

“I ask, what do you really want? Do you want your kids to go to school without fear? Do you want your grandchildren to have a dream? I want my kids and your kids to have a dream they can earn — earn with hard work, love and compassion for others. However, I hope and pray their dreams and opportunities aren’t blocked by the fears and pain caused by racism. We are called to Love. The commonality that we all share is that God created us all to love. We can make a change. We must make a change. Black lives matter. God loves color. He loves us all. He loves you. He loves me.”