"So Proud Of My Baby Girl" 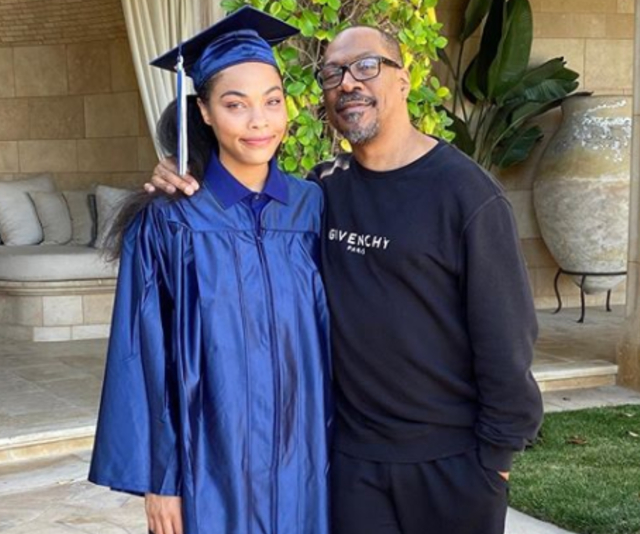 Eddie Murphy and ex-wife Nicole Mitchell Murphy have a graduate on their hands! Nicole took to her Instagram earlier today to share that the former couple’s youngest child, Bella Murphy, is officially a high school graduate.

“So proud of my baby girl right here,” Nicole wrote to her daughter. “Congratulations my love,” the proud mom shared.

Bella has big things on the horizon following her high school graduation. It was just a few months ago that Nicole Murphy told Wendy Williams that her youngest daughter had a role in her father’s upcoming film, Coming To America 2.

“She had to audition,” Murphy told Williams. “It wasn’t like, ‘Daddy, give me the role,” the celebrity mom revealed. “She had to actually get out there.”

I’m tryna be like Izzy Daniels in Jump In

Coming To America 2 is slated for release in August. Eddie Murphy expressed excitement in fans seeing the film during an interview on ELLEN last December.

“I couldn’t be happier with how it turned out,” the celebrity father shared. “A lot of people have this expectation, like people would say to me when they found out I was doing it, ‘Don’t f— that movie up.’ So we’ve gone above and beyond what anybody would think. I’m really, really happy with it.”

KEVIN HART: 'AS A FATHER, I'M WORRIED ABOUT THE FUTURE OF OUR NEXT GENERATION'

KEVIN HART: 'AS A FATHER, I'M WORRIED ABOUT THE FUTURE OF OUR NEXT GENERATION'