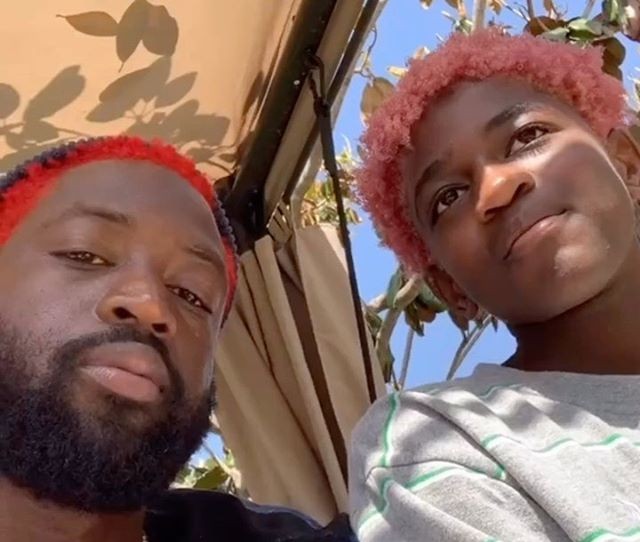 Recently Dwyane Wade documented the transformation of his hair on social media as he dyed his black hair pink and then to a brighter shade of red. One Instagram post featured a picture of Wade showing off his pink hairdo in a mirror. Another post showed Wade with his bright red hair enjoying a glass of wine. He captioned the post: “𝑊ℎ𝑒𝑛 𝑡ℎ𝑒𝑦 𝑡ℎ𝑖𝑛𝑘 𝑡ℎ𝑒𝑦 𝑘𝑛𝑜𝑤 𝑦𝑜𝑢– 𝑆𝑤𝑖𝑡𝑐ℎ 𝑖𝑡 𝑢𝑝! #𝐹𝑟𝑒𝑒 #𝑅𝑒𝑑𝐻𝑎𝑖𝑟𝐷𝑜𝑛𝑡𝐶𝑎𝑟𝑒🩸.”

Dwyane Wade’s eldest son, 18-year-old Zaire Wade, commented on his father’s red hair, writing “Dennis Jr was good!!” in reference to NBA legend Dennis Rodman, who dyed his hair a variety of colors during his career. Ironically, Wade released another post with his red hair next to a picture of Dennis Rodman sporting red hair. The picture has a caption of Rodman complimenting Wade’s hairdo, saying “Nice. Hair. Brother. 👍.” Wade repeated those words in the caption of the post.

Dwyane’s 12-year-old daughter Zaya Wade was in on the fun, dying her hair pink as well. On TikTok, Dwyane shared a clip of him and Zaya exhibiting their red hairstyles. Another video shows Dwyane slowly walking into a pool in one scene, and the next scene features Zaya and Dwyane behind the wheel of a Porsche convertible. The song “Deep End Freestyle” by Sleepy Hallow played over the video and Wade captioned it: “#𝑊𝑒𝐷𝑖𝑓𝑓𝑒𝑟𝑒𝑛𝑡 #𝐷𝑒𝑒𝑝𝐸𝑛𝑑.”

Dwyane Wade shares Zaire and Zaya Wade (who was originally born as Zion but came out as transgender around February 2020 and changed her name to Zaya) with his ex-wife Siohvaughn Funches. He also shares his 6-year-old son Xavier Wade with his ex-girlfriend Aja Metoyer. Dwyane is married to his current wife, actress Gabrielle Union and together they parent their 1-year-old daughter Kaavia Wade.