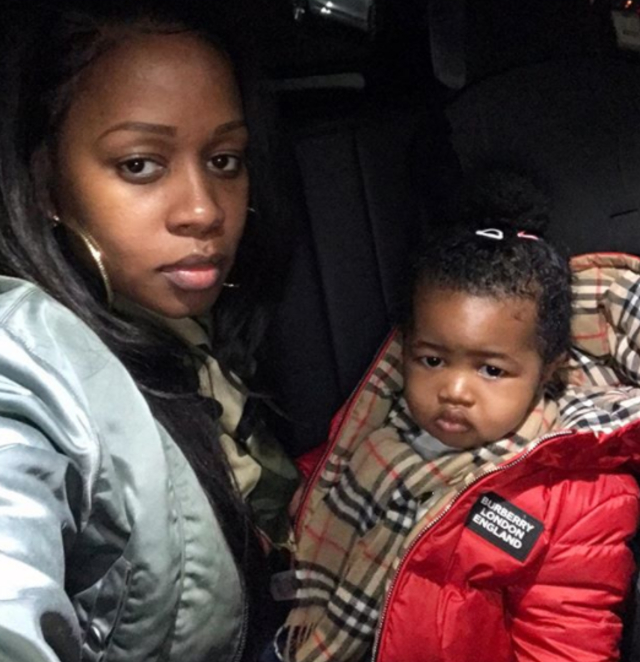 Remy Ma and Papoose are coping with life under quarantine rules in New York City. The celebrity couple recently spoke with the ladies of The Real about their lives at home with their 1-year-old daughter, Reminisce Mackenzie.

“We have a 1-year-old and, as you see, she’s very active,” Remy told The Real co-hosts. “They get bored after a while, so you have to do things to keep them entertained,” the celebrity mom said. “She’s not been outside, she’s not been around any other kids, and she might get tired of us two old people in here with her all the time. So I’m trying to think of things to keep her entertained.”

It was just a few weeks ago that Remy Ma gave Reminisce a party just for the sake of doing so. The celebrity mom acknowledged that her daughter’s birthday was months away. Still, it was necessary to celebrate The Golden Child and her toys.

“She needed new toys and was getting restless in the house all day everyday,” Remy told her Instagram fans. “She said, ‘No’ but she loves it,” the celebrity mom said of her daughter’s reaction to the surprise bash.

I was up all night SNEAK decorating 😏cuz I wanted to surprise @ReminisceMackenzie- I threw her a party JUST CUZ; she needed new toys and was getting restless in the house all day everyday…she said “no” but she loves it lol Watch my story to see the process #RemyMa #TheGoldenChild #MyBabygirl #RemyMArtha

Both Remy Ma and Papoose are settling into domestic living during this time of isolation. “She’s been making some amazing meals,” Papoose told The Real co-hosts. “It’s like a blessing in disguise,” the celebrity father further explained. “Even though it’s a tragedy across the planet, but there’s definitely some good coming out of it spending quality time with the family.”

Had sooo much fun with this lil lady @ReminisceMacKenzie 🐣 🐰 She ate a gazillion lollipops 🍭- well, actually she just OPENED that many , took a lick and moved on to the next😋doesn’t like Peeps (but really, who does🥴) And at the end of the night refused to take off her skirt and literally cried when I took off her necklace. Me & my husband @PapoosePapoose are so thankful and blessed to have her Sidebar: thank you to @diaperdivacreations for my “Quarantined With My Peeps” banner and my partner in anything party related Mimi from @nevaehleheventsandweddings for going out and grabbing supplies I needed to make the baby’s Easter basket😘 #BlackLove #MeetTheMackies #RemyMom #RemyMArtha #RemyMa

Could Remy Ma and Papoose’s family grow by one at the end of this quarantine? Maybe so! “We actually have a boy waiting because we did in-vitro,” Papoose said when the notion of another child came up. “So it’s just a matter of when she’s ready to do it,” the rapper added.

WHEN WILL SCHOOLS REOPEN?