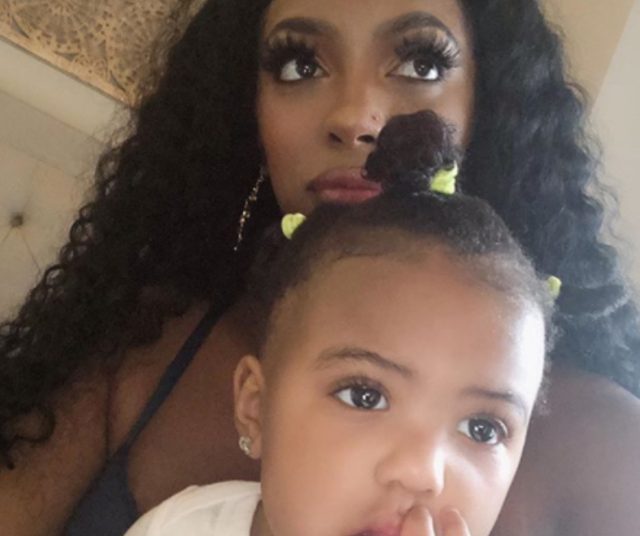 Porsha Williams is experiencing fertility struggles. The Real Housewives of Atlanta (RHOA) star opened up about her battle with fibroids during Sunday night’s bonus episode of RHOA.

Porsha was talking with her fiance, Dennis McKinley, about the idea of having another child when the subject of fertility came up. “We talked about in counseling just being completely honest about everything,” Porsha told Dennis. “I didn’t tell you that I had got a semi-permanent birth control called IUD,” the RHOA star revealed.

#Swipe 🎥👧🏾🤡Outside was a whole movie y’all 😂 Gymbo and Pj got into it then he took her car … but wait Pj came back with them hands and drug poor Gymbo!! But all is well they made up just in time for a strawberry snack at the house 🤣😍 .#PjStartedIt🤫 #BabyCinema #Drama 🎥 @pilarjhena * I wish I could edit!! It was like a lifetime movies 😂😂😂😂

“[I got it] about three weeks ago,” Porsha continued. “I just didn’t want us to make any mistakes, or whatever. I had wanted to tell you then that I had got it, but then it was just like I didn’t. And then, you kept talking about baby Dennis and all of that. So then I was like, ‘Okay. I probably should go ahead and tell him.'”

Porsha Williams was going to tell Dennis McKinley about the semi-permanent birth control, but then her stomach began to cramp on a daily basis. The RHOA scheduled an ultrasound, which revealed that the IUD string “disappeared” while a new fibroid developed.

“It’s in the same place as my other fibroids were, [but] it’s much, much larger,” Porsha told Dennis. Williams asked the doctor if the fibroid could be removed by way of a myomectomy. “She was like, ‘To have the myomectomy again would make the whole thing difficult to deliver a baby.’ The doctor did present another option to Porsha. “She was like, ‘Well, the other option would be to leave it and then if I got pregnant, see if the baby would possibly outgrow it.'”

@porsha4real I’m so proud of you & your efforts to advocate for @MarchofDimes shout-out to @MarchofDimesCEO & fellow U of M grad Stacey D. Stewart … Learn more about how you can help at marchofdimes.org “Healthy mothers & Strong babies” 👼🏽❤️ 🌈 📸 @freddyoart

The RHOA star was not in favor of the second choice. “I don’t know,” Porsha told her fiance. “I’m scared to just roll the die and get pregnant, and not know what’s going to happen.”

It was just a few months ago that Porsha Williams and Dennis McKinley were discussing the notion of expanding their family. “I think I’ve got one more in me,” Porsha said when asked about having another child.

Porsha Williams suffered a miscarriage in the past because of fibroids. She and Dennis McKinley have one child, Pilar Jhena McKinley, together. Stay tuned for more Real Housewives of Atlanta family news!

ALLISON HOLKER AND TWITCH ARE 'THE BEST P.E. TEACHERS EVER' DURING QUARANTINE

ALLISON HOLKER AND TWITCH ARE 'THE BEST P.E. TEACHERS EVER' DURING QUARANTINE