TOYA JOHNSON AND DAUGHTER REIGN RUSHING MAKE THE MOST OF LOCKDOWN

Come Get Your Sister, Reginae! 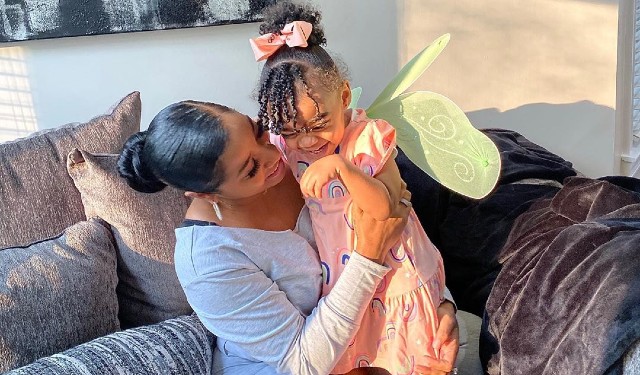 They may be locked down due to the coronavirus pandemic, but that doesn’t mean that Toya Johnson and her daughter, Reign Rushing, cannot have a good time. The celebrity mom recently shared pictures and video clips of her daughter having fun while living in quarantine.

One video clip of Reign showed the little one eating ice cream in solitude. “This little girl is touching every d*mn thing in this house,” Toya told her social media fans. “She went and took the ice cream out of the freezer and put it on the side of the couch then took her PJs off, got her a spoon and started eating her ice cream,” Johnson said. The celebrity mom ultimately told Reginae Carter to “come get your sister.”

Another video clip of Reign showed the youngster playing and singing The Birthday Song to her late uncle, Rudy Johnson. “It’s true that your physical existence is no longer here in the world but I can feel your presence each and every moment,” Toya wrote to her brother. “Rude Boy, I will never forget you and will always keep you in my heart,” the celebrity mom wrote.

“I miss you so much,” Toya lamented. “Happy Heavenly Birthday,” she added. “Here’s a little birthday song from @reign_beaux. I wish you could’ve met her.”

Toya Johnson’s brothers, Ryan and Joshua Johnson, were murdered in New Orleans nearly four years ago. Antoine Edwards was charged and convicted of the double homicide and received the maximum sentence for his crimes last October. Toya Johnson shared how she learned of the passing of her brothers during a 2016 interview.

“I got a call from my sister-in-law and she was like, ‘Your brothers just got shot,'” Toya revealed. “The music was loud [in the background] and I’m [thinking], ‘This can’t be real.'”

Toya attempted to reach out to other family members for a further explanation of the situation to no avail. Johnson eventually reached her sister-in-law for a second time at which point she learned that emergency services had not taken her brothers to the hospital and no one was allowed to go near the crime scene. “When she said that,” Toya said, “I just knew.”