"Love Is The Money" 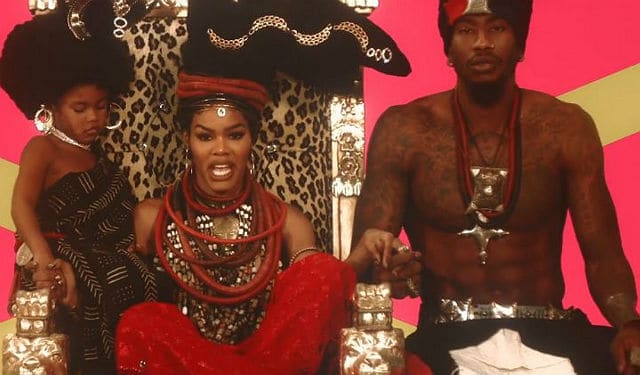 Just call it a revolution! Teyana Taylor is spreading the message of love with her new music video for ‘We Got Love.’

Teyana’s husband, Iman Shumpert Sr., and their daughter, Iman Tayla, present a united front at the beginning of the music video. Taylor reflects on her labor and delivery experience during the first verse of the song. “I gave birth on the bathroom floor/ Just me, Iman, and headphone cords,” Teyana sings.

Some may remember Teyana Taylor and Iman Shumpert’s birthing experience. The celebrity couple could not make it to the hospital before things progressed. Iman called for emergency services who guided him through the process of delivering Iman Tayla on the bathroom floor in the family’s home. Teyana and Iman held their wedding ceremony in the same spot where their daughter was born months later.

“My water broke on the toilet,” Teyana said of her birthing experience during a recent interview with The Breakfast Club. “As soon as my mom said, ‘Does she have any discharge? Did the water break?’ I swear to God two seconds later, it broke. I got so scared because I just knew, I’m one of them type of n—- I was getting an epidural, I was gon have Monica sing to me — that’s Junie’s godmother — nana gon come [to] pray. We had this all planned out,” Taylor said.

Things do not always go as planned, which is something that Teyana learned quickly during her labor and delivery experience. “[It was an] ‘I didn’t have a choice childbirth,'” Teyana told The Breakfast Club. “Junie was a month early,” the celebrity mom said of her daughter’s birth.