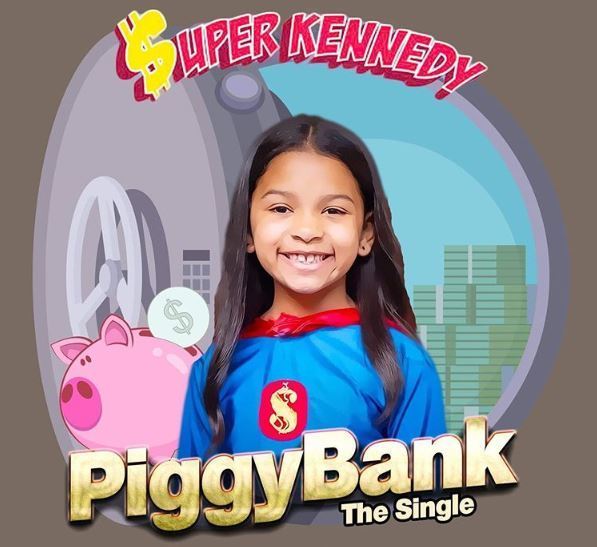 Financial literacy creates wealth generation and seven-year-old Kennedy O’Neal, aka Super Kennedy, is making sure that her lyrical genius can take everyone to the bank!

Through her new rap song, this lyrical genius is on a mission to teach kid,s and adults too, about financial literacy and responsibility. Her single, which debuted January 1st of this year, “Piggy Bank,” gets everyone moving and grooving and has a lasting message.

“I had so much fun recording it. At first, I was a little nervous about recording, but my dad gave me the boost that I needed,” Kennedy said in a recent interview. “I would tap on the microphone because I couldn’t believe my voice was being recorded. It is an unbelievable feeling.”

According to a survey on GOBankingRates.com, 58% of Americans have less than $1,000.00 in their savings accounts, whereas many don’t have savings accounts at all. O’Neal, who has been fascinated with money since she was younger, wants to make sure that she can help to inspire other young people to change that statistic.

Sighting Beyonce as one of the people in the industry that she admires, O’Neal is currently working on an album to accompany the single. The talented young rising star helped write and produce her new song along with her dad Chris “Done Deal” O’Neal, Tae Giovanni, DJ Chub, James Wood and Glenn Schick Mastering.

“I really want kids to save money! It’s cool to get toys and stuff, but you have to save to get ahead. Toys break, but money can grow,” Kennedy said. “My videographer is Tawaan Brown and he is amazing! It would be awesome if Ellen DeGeneres could hear my song and have me on her show. She is sooo funny and everyone knows her! I know she could do a cool dance to it.”

In addition to her single and upcoming complete album, O’Neal also has a financial literacy book to accompany her message. In July 2018, she appeared on Good Morning America to promote her book which is entitled, “The Adventures of Super Kennedy: Saving and Investing.” However, O’Neal’s message does just not encompass saving money for yourself, but it also stresses giving back to others.

CDC WARNS THAT PARENTS, GRANDPARENTS ARE TO BLAME FOR CHILD POISONINGS

DWYANE WADE SAYS DAUGHTER, ZAYA, KNEW SHE WAS 'A STRAIGHT TRANS' AT 3-YEARS-OLD

DWYANE WADE SAYS DAUGHTER, ZAYA, KNEW SHE WAS 'A STRAIGHT TRANS' AT 3-YEARS-OLD