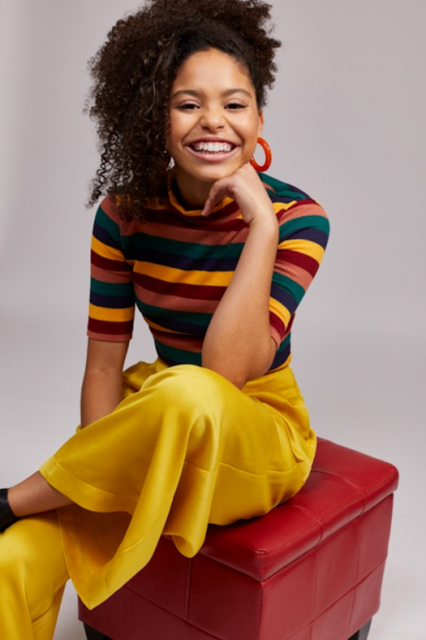 Netflix has created some of the most amazing new shows and as a result, they have shined a bright spotlight on a new generation of rising stars and Symera Jackson is unquestionably one of them that you must get to know!

Born and raised in Los Angels, CA, Jackson has been a working actress in both television and commercials since she was nine-years-old. Having been seen on Disney’s popular Sydney to the Max, and on ABC’s Alex, Inc., Jackson has proven that she is an amazing talent who is just beginning to conquer Hollywood.

Taking her career to the next level, this rising star has recently landed a series regular role playing Jackie Murphy in the upcoming Netflix series, TEAM Kaylie.

BCK Online had an opportunity to sit down with this amazing young talent to get to know her better. Check out the exclusive interview below!

BCK Online: What made you want to start acting?

Symera Jackson: I’ve always enjoyed performing. When I was a little girl, I’d put on plays and sing songs for my family. I joined a children’s singing group and instead of doing recitals, we’d perform at assisted living senior centers and I loved making everyone smile, and I knew that I wanted a future in entertainment. I was also fascinated with the Disney movie, Enchanted, and I could not believe that people could make a career out of playing pretend. All of this dancing and singing lead me to doing musical theater, followed by short films, commercials, television and now my awesome series regular role as Jackie Murphy in Team Kaylie on Netflix!

BCK Online: What do you think is the most difficult part about being an actress?

Symera Jackson: I think the most difficult part of being an actress is learning how to persevere. You can put your whole heart into auditioning for a role, and sometimes it doesn’t work out and you don’t get the part. It’s often hard not to take things personally. So, I’ve learned over the years to always be prepared and put my best foot forward and to do the best work I can. From there, it’s out of my hands. There are a lot of “no’s” in this business. But when you do get the “yes”, it’s the most incredible feeling. I’ve learned to focus on things that I can control like having a positive attitude, being confident, and patient and knowing that when one door closes, there’s going to be another one that opens.

BCK Online: Who are some of your favorite actors/actresses?

Symera Jackson: Some of my favorite actors/actresses are Zendaya, Kevin Hart, Storm Reid, Michael B. Jordan, Regina Hall, and Tiffany Haddish. I am also a huge fan of Amandla Stenberg. I loved her last few films, and she delivers such powerful performances on screen.

BCK Online: Which character that you have portrayed do you identify with the most? The least? Why?

Symera Jackson: I identify the most with my character, Jackie Murphy, from Team Kaylie. I felt an immediate connection with her after reading the script and had already started bonding with the character before I went into the casting office! Jackie and I are similar because we both love school and get good grades. However, I tend to be a bit more laid back, while Jackie is quite uptight. Jackie also follows the rules a bit more than I do.

BCK Online: Tell us about your Netflix series, Team Kaylie.

Symera Jackson: Team Kaylie is about a Hollywood socialite [Kaylie Konrad] who is sentenced to a year of community service leading the Wilderness Club at an inner-city middle school (Pico Middle School). Kaylie has to overcome her fears as she attempts to prove herself, since she knows nothing about the outdoors or kids! Our show is a family-friendly comedy with tons of humor. The premise is about self-discovery and embracing who you are as a person. Each of the characters grow and work together as the season progresses. I play Jackie Murphy who is a member of the Wilderness Club at Pico Middle School. She is a perfectionist, rule-follower, goody-two-shoes, and a straight-A student. Even though Jackie seems “perfect” on the outside, she actually does struggle with some insecurities. But, with the support of her friends in the Wilderness Club and Kaylie Konrad, her confidence grows throughout the season. We filmed a total 20 episodes for Season 1. Netflix dropped Part 1 in September 2019, and Part 2 is streaming now, which includes a special Holiday episode! Part 3 will probably drop sometime early in 2020. I hope all of you guys love the show as much as I do!

BCK Online: What advice would you give to young people who want to follow in your footsteps?

Symera Jackson: Whether trying out for the Academic Decathlon team, cheerleading, your school’s basketball team, your school play, etc., my advice is to never give up and always follow your dreams. Love what you do, work hard, be prepared, make mistakes, every time you fall down get up with even more confidence, keep an open mind and be flexible, study, and have fun! I think this advice really applies to everything, not just acting!

BCK Online: In addition to acting, what else do you like to do in your spare time?

Symera Jackson: When I am not acting, I’m usually studying and doing schoolwork. I am now a Freshman in high school and it’s finals week right now, so I’m a bit stressed – LOL. I also love to do aerial silks, bike ride, read, hula hoop, dance/sing, and hang out with my friends.

BCK Online: What other things are you passionate about, organizations, charities, etc.? Why is this work important to you?

Symera Jackson: I am very passionate about the ocean and marine life conservation. I recently participated in a Coastal Clean Up with Heal the Bay. I care deeply for protecting our oceans, keeping our beaches clean and ultimately saving sea animals. I am especially making an effort to focus on reducing plastic pollution and eliminating single use plastics.

I was also recently featured in the Sandy Hook Promise “Back to School Essentials” PSA. As a high school student myself, filming this PSA was a true challenge as the topic is extremely dark and very real. The scene at the end when I was hunkered down and hiding in the bathroom stall was terrifying and also horrifying to know that this type of violence continues to happen today. I’d like to use my voice and encourage kindness and make positive changes in our community. The elements I’d like to continue sharing are the importance of “knowing the signs”, education on mental health, and spreading kindness. The PSA expresses the sad reality of this generation, and how we must make changes and speak up in order to keep our future safe.

Make sure to follow this rising star on Instagram. We have a feeling that this is just the beginning and we definitely cannot wait to follow the journey!