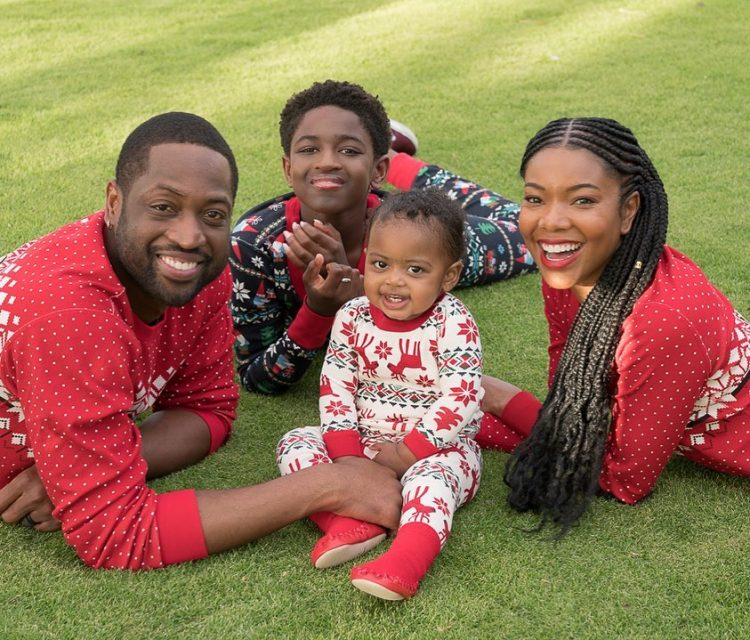 The holidays are a great time to relax and unwind, and what better place to do that than a tropical paradise? At least, that’s what actress Gabrielle Union and her husband, three-time NBA champion Dwyane Wade had in mind when they headed to Maui, Hawaii for their holiday family vacation. The power couple both shared Instagram photos of their trip, where they pose in various pictures wearing matching Christmas pajamas and unique sneakers along with Union’s sister Tracy and their youngest kids: 12-year-old son Zion (Wade’s child from a previous marriage) and 1-year-old daughter Kaavia.

In one photo, the whole group poses on a hammock and the caption reads: “Happy Christmas Eve Eve!” Another photo shows Wade and Union holding glasses of wine and sharing a kiss, with Union’s caption reading: “Wine & Kisses… my wish for us all.” One of the pictures shows Wade and Union peeking out from behind palm trees, and the caption reads: “Christmas Eve!” Union and Zion are seen walking down a beach laughing and smiling in another photo. In one of Wade’s photos, he poses with Zion behind him.

Wade’s other children, 6-year-old Xavier and 17-year-old Zaire, a high school senior who plays basketball for Sierra Canyon High School of California, (he is currently out with an injury) were not seen in the pictures.

“It’s basketball season so our older boys couldn’t have an Hawaii Christmas like the rest of us. But i think they enjoyed their morning anyways. Merry Christmas @zaire @dahveonn we love you both‼️” Wade wrote of his older children.

However, it appears from the looks of the photos that the rest of the family had enough fun to make up for them.

Unfortunately, the past two months have not been so fun for the Wade family, as Zion, who happens to be gay, was criticized and mocked by trolls and haters in a family Thanksgiving Instagram post for wearing a crop top and manicuring his nails. Wade quickly came to his son’s defense, responding on Twitter: “I’ve seen some post-thanksgiving hate on social about my family photo. Stupidity is apart of this world we live in—so I get it. But here’s the thing—I’ve been chosen to lead my family not y’all. So we will continue to be us and support each other with pride, love & a smile!”

DRAKE REVEALS HE WASN'T INITIALLY SURE ADONIS WAS HIS SON

DRAKE REVEALS HE WASN'T INITIALLY SURE ADONIS WAS HIS SON