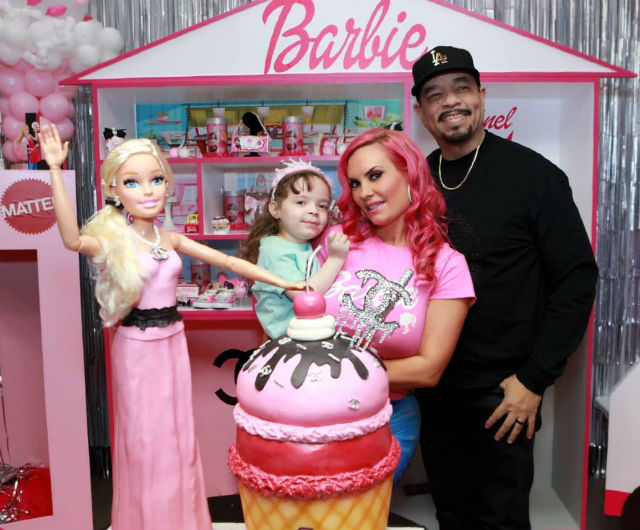 Ice-T and his wife, Coco Austin, gave their daughter, Chanel Nicole, a spectacular birthday party last weekend. Barbie was the theme of the bash and Chanel was proud to rock apparel that bore the toy manufacturer’s signature writing.

“Chanel just thanked everyone at her EastCoast Birthday,” Ice-T told his Instagram fans after his daughter’s festivities convened a few days ago. “Happy 4yrs old,” the celebrity father said to his daughter.

One aspect of the party that was particularly interesting was Chanel Nicole’s cake. The large pastry was as big as the birthday girl and was shaped like a cupcake. “Chanel’s cake was just as tall as her,” Coco Austin told her social media fans. “She found that amusing,” the celebrity mom said.

“She looks just like Ice,” one fan said. “I can’t get over it,” the social media follower gushed. Another of Coco Austin’s fans said that Coco was an “awesome mom.” Indeed, she is!

Coco was the subject of a bit of criticism earlier this year. The celebrity mom revealed that she still breastfeeds Chanel, which caused some to cringe.

“It’s more of a comfort thing now,” Coco told her fans and critics. “Naptime and night time are our time,” she said.

Ice-T was quick to defend his wife after some critics said that Chanel was not getting all of her nutrients. The celebrity father was sure to reveal that his daughter also enjoyed her fair share of hamburgers in addition to her mother’s nurturing breast milk.

Someone turned 4 on Thanksgiving!!! … I tell mom I'm a baby big girl cuz mommy wants me to be her baby forever Shirt- @creativebowtiqueni

Chanel Nicole is Ice-T and Coco Austin’s only child together. Ice-T also has an adult son named Tracy and a daughter named Letesha from a previous relationship.