Home » YOUNG STARS » HELLO SUNDAY GIVES THEIR LAST PERFORMANCE ON ‘THE VOICE’: “WHAT AN AMAZING EXPERIENCE”

HELLO SUNDAY GIVES THEIR LAST PERFORMANCE ON ‘THE VOICE’: “WHAT AN AMAZING EXPERIENCE” 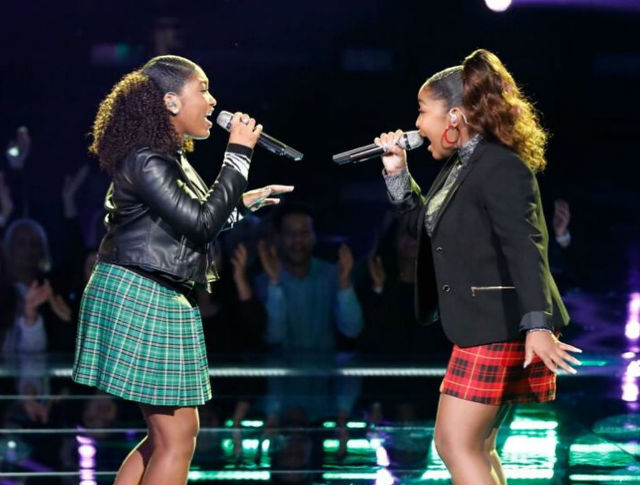 On December 10, NBC’s singing competition, ‘The Voice’, which is in its 17th season, eliminated four of the Top 8 contestants, leaving the Top 4 competitors left. Unfortunately, Kelly Clarkson’s duo of 14-year-olds Myla Finks and Chelsea Glover, better known as Hello Sunday, were among the four singers eliminated, ending Hello Sunday’s historic bid to become the first duo to win ‘The Voice’.

Hey WEEKENDS!!! We just finished our last performance of the evening! PLEASE VOTE FOR US TO MAKE IT TO THE FINALE! There are 3 ways! 1. Vote on the voice app, 10 times 2. Vote on The Voice Website 10 times. 3. Stream Our cover of Don’t You Worry Bout A Thing on Apple Music!! ❤️♥️❤️♥️ (CLICK THE LINK IN OUR BIO TO VOTE NOW)

The three artists with the most votes were granted an automatic spot in the Top 4, and the two artists with the least amount of votes were automatically eliminated. The three artists with votes in the middle had to sing in the Instant Save round and leave it up to the fans to vote on which competitor received the final spot in the Top 4. Hello Sunday is no stranger to the Instant Save round, as they previously won an Instant Save to make the Top 13. Hello Sunday delivered an excellent cover of pop singer Sia’s hit song “Chandelier”, but it was not enough to save the duo from elimination, bringing their campaign to an end.

Despite being eliminated, Hello Sunday was grateful for the experience and their time on ‘The Voice’. The duo thanked Clarkson for mentoring them, with Finks telling Clarkson: “You have really been the mama bear for us.” The duo followed up with an emotional Instagram post thanking Clarkson, ‘The Voice’, their family, friends and their supporters:

“What an AMAZING EXPERIENCE!!! So no we didn’t WIN The Voice BUT we are WINNERS regardless. We have worked with the legendary @kellyclarkson and have shared our gift to the world on national television week after week. THAT IS A MAJOR WIN! This is truly only the beginning. Grateful is what we feel and have felt throughout this entire journey. We want to thank @nbcthevoice and Kelly for believing in us. We want to thank all of The Voice crew, staff, band, glam, wardrobe, hair, EVERYONE for helping our dreams come true. Thank you to our manager @iamnatarshagarcia and our creative director @brandin.jay for pushing us and helping us through. Thank you to our parents for the sacrifices, love and support throughout this journey. Our family and friends for supporting and to everyone who voted for us week after week THANK YOU. “

"SYDNEY TO THE MAX" HOLIDAY EPISODE IS A MUST-VIEW TONIGHT!