"I'm So Nervous, Happy, And Anxious" 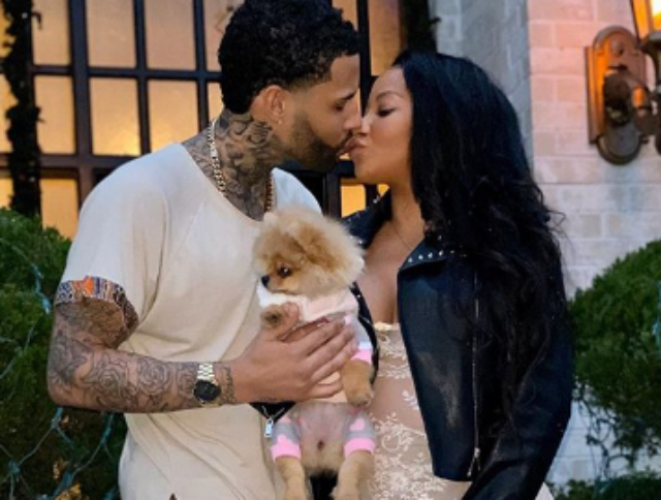 Congratulations to Hazel-E and her fiance, De’Von Waller, on the expectancy of their first child! The Love and Hip Hop: Hollywood (LHHH) star confirmed her pregnancy on Thursday (December 5).

When I’m with you two, I can just be myself. #TheWallers 👫🐶 Tasteful Tease kimono by @dollskill

“I’m so nervous, happy, and anxious to take this journey but God had a plan when he placed you in my life @devonwallerofficial,” Hazel shared online.

“We went half and made it through the first trimester,” the LHHH star exclaimed. Hazel went on to assure her fans that she had not planned to hide her pregnancy from the public forever. “[I] just wanted to make sure we secured the baby,” the celebrity said.

He put that lil 👼🏽 in my ultrasound. I’m so nervous, happy, and anxious to take this journey but God had a plan when he placed you in my life @devonwallerofficial . We went half & made it thru the first trimester! (I wasn’t gone hide it from y’all forever, just wanted to make sure we secured the 👶🏽) 🙌🏽 #2020Baby #omgimfinnabeawholemom & a Wife #GodAnsweredAllMyPrayers 🙏🏽

Hazel-E and De’Von Waller’s expectancy marks the second time that she has been pregnant in the past three years. Hazel suffered a miscarriage in 2016, which she revealed during an interview with VladTV.

“I was pregnant and it got tricky for me,” Hazel explained. “At the end of the season with being pregnant, I end up having a miscarriage,” she shared.

Hazel-E also revealed that she would have given birth to a child with comedian Katt Williams had she not suffered a miscarriage. The Reality TV star even presented the idea of her relationship with the comedian ending because of the tragic situation.

De’Von and Hazel shared the news of their engagement back in October. “I’m finna pass out,” Hazel told her social media fans. “This can’t be life,” she added. “I’m finna be a whole wife‼️ #GodIsGood all the time.”

I must be fucccinnnn dreaming!!!!!!!!!!! OMG baby! Yes yes yes @devonwallerofficial ❤️❤️❤️❤️❤️❤️❤️❤️❤️❤️❤️❤️❤️ @jimmyxboi I know you #thestreetsjewler but damn big hommie you out did yourself!!! 10🥕🥕🥕🥕🥕🥕🥕🥕🥕🥕on my finger! WTF #DoneRizzle #ShoutOutJimmyfortheDrip #Houston I’m forever grateful for you helping me center myself and focus on my heart & helping me embrace real, true love, without 0 intentions. I’m finna pass out…this can’t be life 😍 Future Hubby – #ItJustUs ❤️🔒👰🏽🤵🏽 10.6.19 – I’m finna be a whole wife‼️ #GodIsGood all the time. 🙏🏽