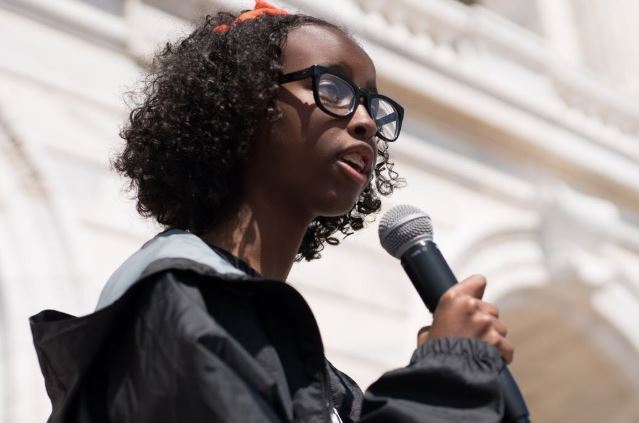 Sixteen-year-old Isra Hirsi is on her way to hopefully becoming one of the most powerful women in the world as she has her sights on the 2040 oval office.  However, in the present, the Minnesota teen is doing her part to make sure to bring attention to climate change as she is the co-executive director of the U.S. Youth Climate Strike.

me on spring break: joining my friend in her climate school strike! #climatestrike ♻️

The teen has a passion for climate justice, and everyone is taking note, including Teen Vogue, who named Hirsi as one of their 21 Under 21.

“Organizing may seem scary at first — it definitely can be — but everyone and anyone can be an organizer,” she told the outlet in an interview. “Taking your first leap is necessary to create change. You are allowed to take up those spaces, and don’t you ever let anyone tell you differently.”

Balancing her life as a fervent activist and teenager is hard for Hirsi; however, she doesn’t let that deter her from her goals and future for the climate. Standing up for what she believes in is inherited as she is just like her mother, Minnesota politician, Ilhan Omar. And of course, just like her mother, she has her sights set on the political arena.

“I see myself in 2040 [as] the president-elect. I have been dreaming to become president since I was five, and the year I dedicated to my run is 2040.” And there is no doubt that this amazing young lady will not give her challengers a run for their money!

HELLO SUNDAY ADVANCES ON 'THE VOICE'

SIX BREASTFEEDING TIPS FOR ALL NEW MOMS OR MOMS-TO-BE

SIX BREASTFEEDING TIPS FOR ALL NEW MOMS OR MOMS-TO-BE