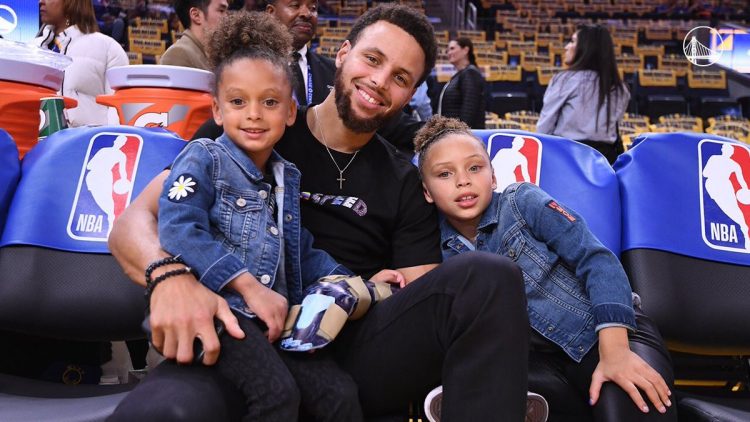 Three-time NBA champion Stephen Curry and his daughters, 7-year-old Riley and 4-year-old Ryan were spotted at the Golden State Warriors game against the Boston Celtics on Friday, November 15 in San Francisco, California. Curry, who was out with a broken hand, sat in between his daughters as he watched his Warriors lose to the Celtics 105-100.

Since then, the Warriors have been plagued by a series of unfortunate injuries. During the 2019 NBA Finals last season where the Warriors were defeated by the Toronto Raptors in six games, Kevin Durant, who won two straight NBA championships and two NBA Finals MVP (Most Valuable Player) awards with the Warriors, injured his Achilles tendon in Game 5. Durant, who left the Warriors for the Brooklyn Nets in the offseason, is out for the entire season as he recovers. Three-time NBA champion and Curry’s fellow “Splash Brother” Klay Thompson injured his ACL in Game 6 of those same NBA Finals and is expected to miss at least half of the season.

As for Curry, he broke his left hand on October 30 in a 121-110 Warriors loss against the Phoenix Suns, sidelining him for at least three months. D’Angelo Russell, the NBA All-Star point guard who the Warriors signed in the offseason, sprained his thumb during the aforementioned Warriors-Celtics game on November 15 and has not played since. To further add to the Warriors’ woes, three-time NBA champion Draymond Green suffered from a sore right heel and did not play in the Warriors’ last game against the Dallas Mavericks on Wednesday, November 20, where they were utterly defeated 142-94, their worst loss since 1973. Warriors head coach Steve Kerr, who coached the Warriors to three NBA Finals victories, said about the loss: “Flush it down the toilet. Literally, you just move on. You don’t take anything from a game like this.”