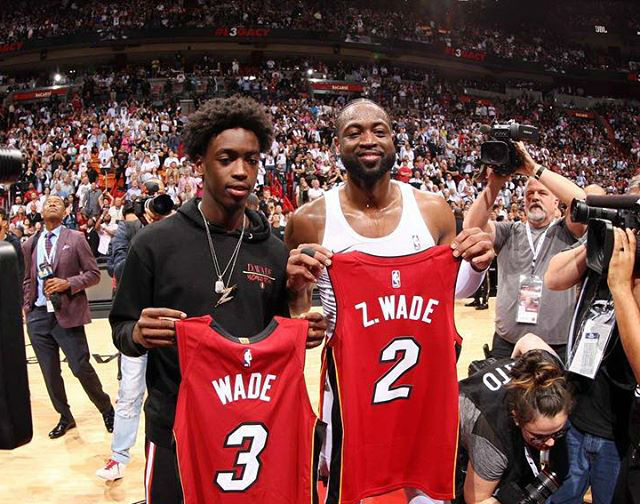 This dramatic increase supports a long held scouting theory that bloodlines play a role in the evaluation process. Though bloodlines are by no means the ultimate measure of an athlete’s talent, it is still accounted for when scouting. This makes Zaire Wade’s jump from relative unknown to prospect an interesting story.

Motivated By the Fear of Being Average

Calling Wade, a senior attending Sierra Canyon High School in California, a relative unknown might seem a bit strange since he is the son of the Dwyane Wade, a 3-time NBA Champion with the Miami Heat and a future NBA Hall of Famer. However, when it comes to recruitment, Wade has not garnered much attention, as he has only received scholarship offers from DePaul, UC Riverside, Rhode Island, and Toledo and was ranked No. 346 in the 247Sports Composite Rankings 2020 class. Over the summer, Wade competed in the Nike EYBL, NBPA Top 100 Camp and the Phoenix NCAA Regional Camp, where despite solid play; he would often make reckless decisions with the ball and take ill-advised shots, which in part lead to his low ranking.

That would soon change as of last weekend. After Sierra Canyon defeated Phoenix Hillcrest Prep 83-70 in an exhibition game where Wade’s famous father Dwyane and the equally legendary LeBron James were in attendance, 247Sports updated Wade’s ranking from 346 to 129 in the 2020 class.

A 6-foot-3 guard with long arms and the ability to pass with either hand, Wade was able to impact the game with his excellent vision and his precise passing. In addition, Wade improved his decision making, shot selection and defense, proving the worth of his increased rating. More importantly, Wade made it known to the scouting world that he is more than just Dwyane Wade’s son; he is a very talented basketball player in his own right with amazing potential.

'THE SPONGEBOB MOVIE' COMES TO THEATERS NEXT YEAR!