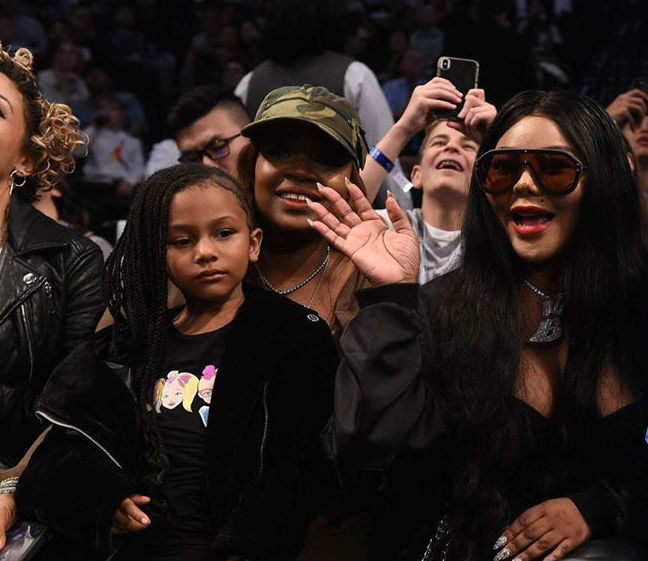 Lil’ Kim and her daughter, Royal Reign, were spotted sitting court side at the Brooklyn Nets game on October 23rd at the Barclays Center in Brooklyn, NY. The mother-daughter pair were fittingly dressed in all black as they watched the Nets lose against the Minnesota Timberwolves.

Despite the loss, Tyree Sowell of the Brooklyn Nets was happy to have the Queen Bee’s support. “We loss , but she still here representing. Shout out to the Queen,” he said in an Instagram video post-game.

Earlier this month, The Queen Bee released her fifth studio album,9.  In a recent interview, Kim shared that her daughter’s birth date played a significant role in the naming of her album.

“Nine is my spiritual awakening number. There were nine members in Junior Mafia, my baby was born June 9, Biggie passed on March 9. It is 2019. My birthday is 7/11, seven plus two is nine. When you get a spiritual awakening, you have to act on that moment. And there you have it… Something that’s a spiritual awakening can’t be negative. With every rise, every level you go to, with every win when God is working on your life, the devil’s gonna come. But nine is all positive.”

With such positivity, it’s no wonder that Royal Reign is a big fan of her mom’s record. The five-year-old recently appeared on social media to help promote the new project.  “I really, really really love my mom’s album,” Royal said in a cute Instagram video. “And make sure you keep streaming it and doing good things for it and everything. Bye! And make it #1! Keep streaming!”

“I’m at the Barclays Center, front row Man I'm sitting so close a bitch looking like the coach Please, they all know Kimmy is the best Why you think them nets run around with B's on they chest” – Lil’Kim | The Queen Bee and her daughter, Royal Reign spotted out last night sitting court side at the Brooklyn Nets game. @barclayscenter @lilkimthequeenbee 🐝🐝🐝

KEL MITCHELL TALKS ABOUT HIS KIDS AND MORE ON 'THE REAL'