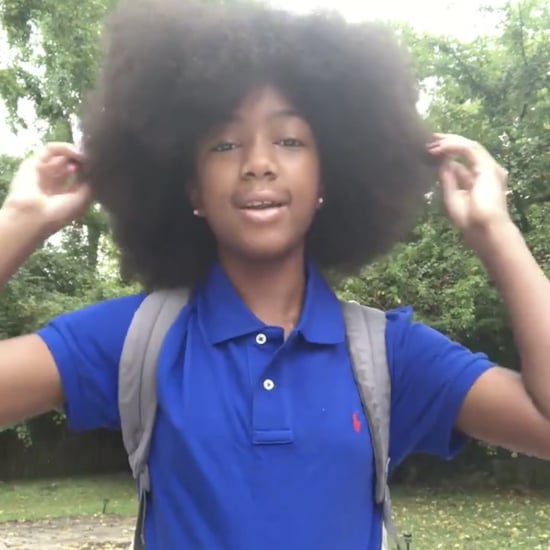 Recently children who have shared a love of their natural hair, have met with humiliating comments, spontaneous haircuts in public, and much more. Stories have gone viral week after week with the horror students have faced because of their natural locks. Well, recently, student Promise Sawyers has made it her mission to show her solidarity for students who choose to wear their hair naturally. Sawyer has vowed to keep wearing her hair natural and grow her afro “bigger and better.”

“I told my mom and she said, “Don’t forget who you are and whose you are! And I said, “Okay. So today, I’m going back to school and I’m coming back bigger and better. And don’t allow anyone to steal your joy, don’t give them that much power. I am Promise Miamor Sawyers,” the fifth-grader told FOX 17 Nashville News in an interview.

The Head Middle Magnet student told the news outlet that she she was wearing braids, but decided to take them out and sport an afro instead. As if on cue, other students at her school had a lot “of mean things to say” about Sawyers style. Although the Sawyers told her mother that she felt pretty, she also felt discouraged by the bullying. “At my old school, people thought my hair was cool,” she told FOX 17.

Well, in true GenZ style, Sawyers took a big negative and turned it into a viral video where she took a stand and gained millions of supporters. Her video was seen more than 2 million times and was shared more than 100K times. And of course, it made its way to Hollywood and Kelly Clarkson and Tracee Ellis Ross said that they too were empowered by the young student.

“I saw your video and I was so moved because your hair is an extension of your legacy, what you come from, your story and everything that you are and your beauty,” Ellis Ross said to Promise, who was in tears. “And I am so glad that you know that at 10-years-old what it took me so long to learn about myself. And you are such an example.”

It’s not easy taking a stand for what you believe in, especially at 10-years-old, but Promise Sawyers is definitely leading by example and we are proud that she is! Keep sporting your crown, queen! You are beautiful.