Home » NEWS » DERRICK ROSE HAS SUPPORT OF GIRLFRIEND AND KIDS AT BOOK SIGNING FOR, ‘I’LL SHOW YOU’

DERRICK ROSE HAS SUPPORT OF GIRLFRIEND AND KIDS AT BOOK SIGNING FOR, ‘I’LL SHOW YOU’ 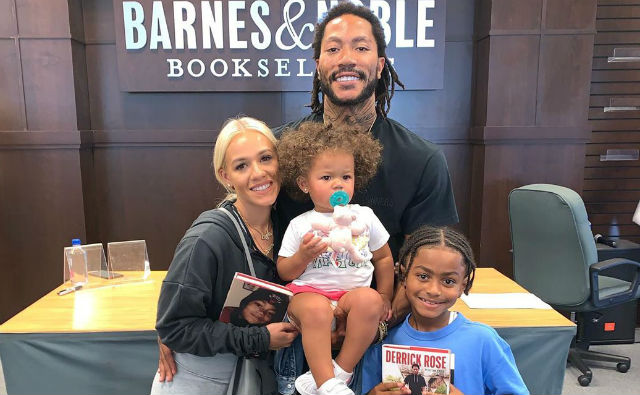 Detroit Pistons point guard Derrick Rose had the support of his girlfriend Alaina Rose and kids Pj and Layla at his book signing in Los Angeles for his new autobiography called “I’ll Show You” :

Written with New York Times bestselling author Sam Smith, Rose opens himself up to fans in a way they’ve never seen before, creating a document that is as unflinching—and at times as uncomfortable—as a personal diary. Detailing his childhood spent in one of his city’s most dangerous neighborhoods; his relationships with both opponents and teammates; the pain and controversies surrounding his career-altering injuries; his complicated relationship to fame and fortune; and his rise, fall, and reemergence as the player LeBron James says is “still a superhero,” I’ll Show You is one of the most candid and surprising autobiographies of a modern-day superstar ever written. (SOURCE)

In a recent interview with ESPN Radio, Rose revealed that he wanted to write the book so he could tell his own story in his own words instead of letting the media control the narrative.

“I wanted to tell my story in my own words. In the past, I felt like I was too young to actually tell the story I wanted to. I see that I have a huge fanbase and they all just want insight on things that I do on an everyday basis.”

A post shared by All in for DRose🌹 (@pooh.drose1)

Derrick has three kids in all. You can get your copy of I’ll Show You on Amazon now!

NICO PARKER TO STAR IN 'THE THIRD DAY' BY HBO

NICO PARKER TO STAR IN 'THE THIRD DAY' BY HBO