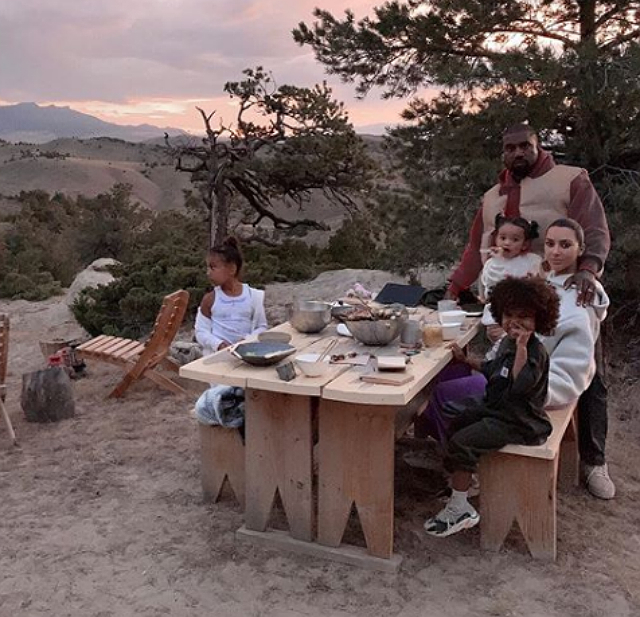 Kim Kardashian and Kanye West enjoyed life on the ranch earlier this month. The Keeping Up With The Kardashians star and her husband took their kids on a vacation in Wyoming a few days ago.

“Wyoming nights,” Kim captioned underneath an Instagram post that showed all but one member of the family present. Psalm West was noticeably absent from the candid, which was likely due to the moment being captured outside in the evening and Psalm being so young.

Some fans mused about the youngest member of the West family’s absence in the family’s candid by implying that the little one was behind the camera snapping the shot. “Did Psalm take this,” one Instagram follower asked. Another social media fan wrote, “Psalm is getting really good at taking pics.” Hilarious!

Kim Kardashian and Kanye West’s family trip to Wyoming comes days after the KUWTK star confirmed that she and her husband purchased a $14 million ranch in the state. Kim recently gave insight into her mornings with the kids during an interview with Harper’s Bazaar.

“It is wild,” the celebrity mom admitted. “A house of four is wild … but complete. Very balanced,” Kim noted. “When you have to be responsible for every single soul, and mornings, I can’t even begin to tell you what getting ready in the morning is like.”

Does Kim Kardashian see herself being responsible for five little souls in the near future? “Absolutely no more [children],” the celebrity told Harper’s.

Kim Kardashian and Kanye West have four kids. Stay tuned for more Keeping Up With The Kardashians baby news!

MARIAH CAREY AND KIDS SING THE "MIXED-ISH" THEME SONG, "IN THE MIX"

TIA MOWRY IS TORN ABOUT HAVING ANOTHER BABY: 'I NEED THERAPY'

TIA MOWRY IS TORN ABOUT HAVING ANOTHER BABY: 'I NEED THERAPY'