Home » NEWS » DENNIS RODMAN WANTS TO BE A BETTER DAD TO HIS KIDS: ‘IT ISN’T SO EASY’

DENNIS RODMAN WANTS TO BE A BETTER DAD TO HIS KIDS: ‘IT ISN’T SO EASY’ 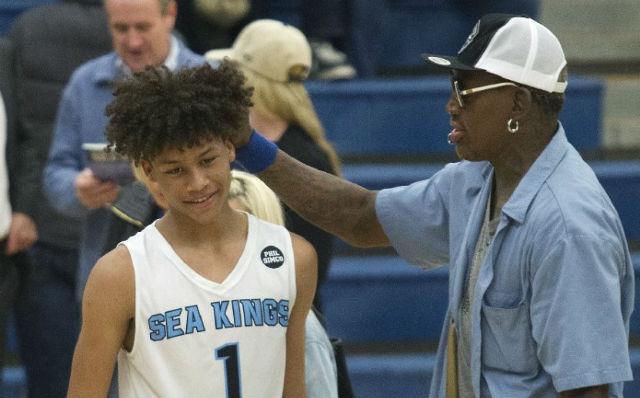 Dennis Rodman wants to be a better dad to his three kids, but it’s easier said than done.

“I want to,” he told ESPN ahead of the release of his 30 for 30 ESPN documentary, Dennis Rodman: For Better or Worse. “But it isn’t so easy.”

He continued, “I lie to myself a lot about s–. ‘I’m a great dad. I love my kids.’ And then I have to go home and sit there and beat myself up because I’m just telling myself all these lies.”

Dennis’ three children, DJ and Trinity (born 2000 and 2001, respectively) and oldest daughter Alexis (born 1988), have largely grown up without their father. Although Rodman lives just 10 miles away from his teenage daughter Trinity, a high school soccer star who practices with the U.S. Women’s U-20 team, and his teenage son, DJ, who plays basketball at Washington State, the thought of visiting them paralyzes him.

Rodman’s own father abandoned him when he was three years old and didn’t resurface until his son was an NBA star. And even though Dennis longs to be the father he never had, his demons prevent him from doing just that.

“We all have demons. I’ve had plenty. Alcohol being one of them — everyone knows that. But I think the only major demon I have right now is trying to convince myself that I am a good dad. That’s the worst one for me. And it’s so hard for me for some reason. It’s very hard for me to break out of that cycle, you know. You feel like it’s too late. It’s one of those things where I never had anyone ever want [to love me].”

The former NBA star  speaks out about his tough childhood, his substance abuse and his own issues as a father in the 30 for 30 ESPN documentary, which aired on September 10th on ESPN. You can  watch it HERE.

KENYA MOORE PLANS TO DIVORCE HUSBAND: 'MY SOLE FOCUS IS MY MIRACLE BABY'

KENYA MOORE PLANS TO DIVORCE HUSBAND: 'MY SOLE FOCUS IS MY MIRACLE BABY'