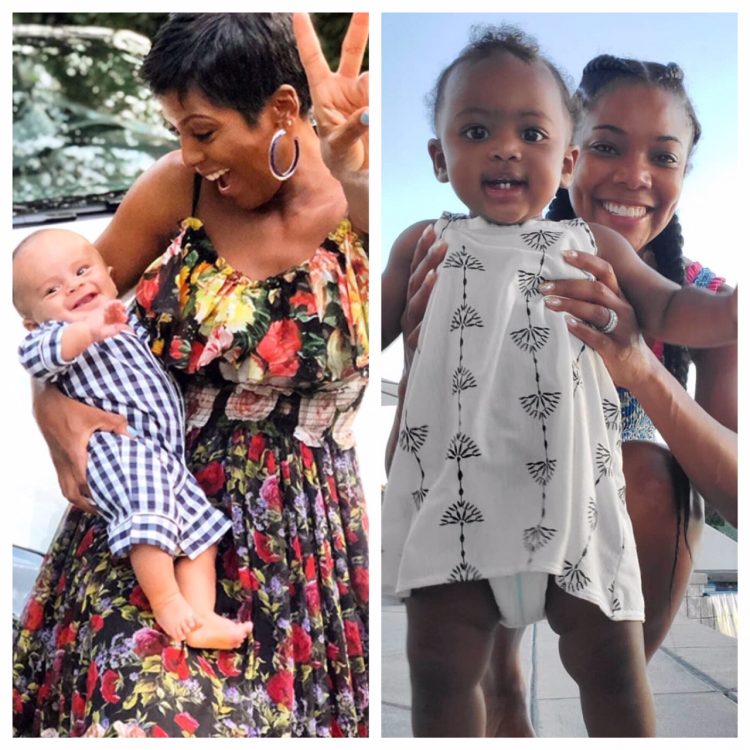 If you have had the opportunity to watch the Tamron Hall Show, you know that it has kicked-off with not only some amazing guests so far, but Hall makes the show fun, interesting, and informative all at the same time. Recently, long-time friend Gabrielle Union joined the talk show host, where the Being Mary Jane actress got the opportunity to play interviewer and Hall was the interviewee in an article for O Magazine. The women talked about everything from mom guilt to journalism and much more. Take a look at a snippet of the interview below.

GABRIELLE UNION: I haven’t seen you since the baby. But even though I’ve already said it…congratulations!

TAMRON HALL: Thank you! And I love seeing Kaavia on Instagram. Like, that video of her jumping into the pool with no hesitation about swimming was so beautiful. I probably watched it 30 times.

GU: She is very adventurous—she has none of the weird anxieties we adults try to put on ourselves, which is awesome. But okay, I guess we should jump right into this interview. I’m going to try to not do all the things I hate about being interviewed. So I’m prepared, but I’m not like, a super weirdo who is going to pull out facts about you when you were a teenager.

You know, lately, I’ve been enjoying talking about motherhood. But at first, to be honest, I didn’t even like to say the word motherhood, because I was a non-mom way longer than I’ve been a mom, so I didn’t want people to see me as one dimensional either. I want them to see this layered journey that I’ve had. But the fact is, I am a mom, and I am so grateful to be here.

TH: I know. It’s hard, especially with social media, because you get put into boxes, and you get labels that you’re like “Hey, I didn’t even ask for this!” But I’m embracing it.

GU: You grew up in Luling, Texas—you’re a Black woman from the South. Do you ever feel like your experiences inform your parenting differently than it might other parents? Like, I’ll say to my husband, “Let’s tell the kids their Christmas gifts are from Santa.” And my husband is like, “There’s no way in hell I’m letting these kids think that old white man is sneaking into our house and doing anything for them.” Because he didn’t grow up believing in Santa Claus. And we have these conversations when it comes to raising our children about where to draw the line between fantasy and “Hey, that’s not how life works.”

TH: 100 percent. Modern parenting is especially difficult for parents of color—we have to talk about not only “Are we gonna say Santa exists,” but also “Is Santa Black?” Again, this is exactly the conversation that we want to have on the show, because some families might not even realize this is a thing. So we want all perspectives. Something as simple as Santa Claus could cause a big debate, so why not have a conversation with real parents of all backgrounds talking about how they approach Santa Claus, and what race he is? It might sound small, but these are the everyday things we’re thinking about.

GU: You’re recently married, you have a young baby, and you’re launching a talk show. But I’m sure that, as I have, you’ve learned by now that as working mothers, there’s no such thing as balancing it all, right?

TH: People keep asking me how I’m balancing everything, and I say “Honestly, I’m not.” Recently my husband and I were at this little beach house with Moses for a weekend, and he said “Maybe I’ll stay for the week with the baby and the nanny while you go back to work.” My heart and lungs were like, “That’s a terrible idea!” Of course my husband is fully capable—he’s Moses’s dad!—but I’m only human and the idea of leaving my son for a week while I went off to work felt truly terrible. So our whole family packed it up and went back to the city together. [Laughs]

Get me outta here. Ready to go to work!!! @tamronhallshow Thank you @wciutheu #chicago for the onesie. Our kinda town💜. Thank you @chicagorudy

And I was recently doing promo for the show in Boston, and my flight was delayed, and I just kept saying, “I want to get home and see my child before he goes to sleep.” Well, I didn’t make it home until 2:00 AM. But after that night, I realized “You know what? I’m not going to beat myself up. Moses was none the wiser.” It helps that I have friends who say, “Tamron, just give up on balance. There are going to be days that you cry, days where you laugh—you’re just going to do your best.” That’s all you can do. That’s the ticket.

GU: It’s funny though…I talk to active, successful dads about balancing parenthood and guilt, and they have a complete absence of the notion of guilt. And these are dads who are involved—I’m talking about 50-50 parents, people like my husband, who has full custody of his children and took the longest paternity leave from professional sports last year. But he doesn’t talk about feeling guilty when he’s away from his children.

TH: Why do you think that is?

GU: Because no one has ever asked him questions like “Do you feel guilty for missing things with your kids?” The assumption is that mothers should experience guilt for missing things, but with dads, it’s just not a thing. So when I get asked that question in interviews, I don’t mind shaming the interviewer like, “I’ve noticed that you interviewed Warren Buffett or Jay Z, and never once did you ask them how they balanced it all with their children.”

GU: Nope. They’re made to feel like superheroes for doing the bare minimum, while we deal with Mom Guilt.

TH: You know, in the course of promoting this show, I had two reporters ask me some interesting questions. One of them was: “Did you ever think about not doing this show once you found out that you were pregnant? Because a lot of affluent women decide not to work and raise a child.” This was from a young woman working for a major publication. And I said “I don’t even understand that question.”

When Mama tries to explain she hit 700k on IG but you find diaper change far more funny and interesting. @tamronhallshow @nickguillory 🤣🤣🤣

And then I had another young writer ask me “Do you think you didn’t get married earlier because you doubled down too much on work—that you worked too hard?” And I’m thinking, “No one who has raised a daughter of color or who has ever been poor has looked at their child and said, ‘Don’t you go working too hard.’” It was the craziest question, because I was taught to work hard, invest in yourself, and shoot for the stars. But this young woman was essentially saying that because I work hard, that led me to be unlucky in love. She would’ve never said that to a guy. And it was most shocking because it came from a young woman!

Get on her level!!! @kaaviajames is HYPED for #agt. Outfit: my new @nyandcompany Red Carpet collection (link in bio) @kaaviajames cute shirt by @theshopforward 🤗

GU: I get questions like that all the time, also from women! It reminds me of this idea that…like, I was advised when I was trying to get pregnant that the best way to get pregnant if you’re older is to unplug from life and work. But I’m like uh, it’s that work that pays for my life. Still, there was definitely this underlying sentiment that my infertility was caused by my ambition.

After enjoying the dialogue between these two women, we are definitely in favor of a live on-camera continuation of their chat. To read the interview in its entirety, click here. And make sure to catch the Tamron Hall Show on ABC. Make sure to check local listings for times.

KENYA MOORE SHARES ADORABLE PHOTO OF HER BABY AND HUSBAND

NIA SIOUX TO STAR IN BRAT'S NEW SHOW "SUNNYSIDE UP"

NIA SIOUX TO STAR IN BRAT'S NEW SHOW "SUNNYSIDE UP"