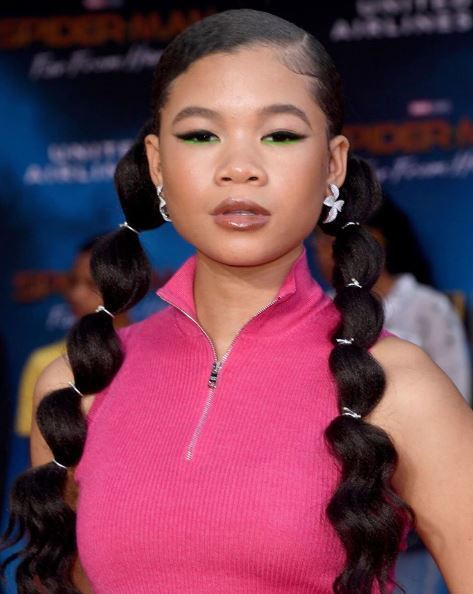 Storm Reid burst onto the scene opposite screen legends, Reese Witherspoon, Oprah Winfrey and more in Disney’s A Wrinkle in Time. The Ava DuVernay hit launched the talented 16-year-old into a position to become a true Hollywood contender.

Reid is back on the big screen, after wrapping a fantastic first season of her HBO series, Euphoria, in a new movie that was written and directed by Jacob Estes. In Don’t Let Go the young rising star shares the screen with David Oyelowo, who told Ebony Magazine, in a recent interview, that, “I had the privilege of visiting the set of A Wrinkle in Time that my dear friend Ava DuVernay was directing. That was the first time I’d seen Storm in person and seen her work. I was very impressed by her talent, by her surety. She was very natural. That chemistry we had was also born out of a real love.”

Entertainment Weekly had the opportunity to sit down with Reid and talk to her about her new movie and what can Euphoria fans expect for next season. Take look at what she had to say below and if you haven’t already, check out Don’t Let Go, which is in now in theaters nationwide.

ENTERTAINMENT WEEKLY: So I’m excited to talk to you about your new movie. The first thing that jumps out about me is that a lot of your recent projects like Don’t Let Go, Euphoria, and When They See Us are definitely dark, and your characters are struggling quite a bit. Are you doing OK after playing these tough roles?
STORM REID: I just try to pick roles that are very impactful and have a purpose, and evoke a conversation—even underlyingly—through the projects I choose to be a part of. I feel that with that there comes complicated characters and grounded characters, but I’m doing great. I’m glad that I’m able to play and portray these characters.

You and David Oyelowo’s characters have such a close familial relationship. What did you two do to build that bond?
I think it was just about spending time together on set, and we got to spend a little time together off set, just making sure that we built a connection between us so we can have a connection for Jack and Ashley. It was only about a four-week shoot so it was really short, but I’m glad that we were able to spend that time together to where we could have a close connection personally and a good connection on screen.

The film has some specific quirks between you and Oyelowo’s character, like a scene where you two have a drawing battle. How did you two develop those moments?
I can’t speak for Mr. David, but I do know with me, I tried to again not neglect how I would feel, and not neglect myself within my character. The drawing scene was definitely just me being me, having fun and drawing what I wanted to draw. I think it’s important to add yourself into your character to make it more believable for yourself as an actor, and for the audience to believe you as well.

You spend a lot of time on the phone with Oyelowo’s character in this film? How did you two make those scenes so seamless? I don’t imagine they were shot simultaneously.
It was quite easy because David and I made a deal at the beginning of [shooting] the movie that we’d always be on set together, even if we weren’t in the same scene, if we had a phone conversation that we would be on set in the same room or in another room to make sure that we did have that connection, and make it easier for communication because I feel like if somebody is across town, and they’re on the phone, it just won’t feel the same for you as an actor. So that’s what we did, and I feel like that’s what really helped make our connection more believable.

And what was it like working with Brian Tyree Henry? He’s in this movie quite a bit as your dad.
He’s so amazing, so funny, and so talented. I had watched him on things like Atlanta, so I was already a huge fan. Working with such a nice person was great, so I’m glad that I got that opportunity.

Having to shoot heavy scenes like your character dying, how did you stay in the right mindset filming that, or find a way to cut the tension?
Well, with all of my characters I just have to step outside of myself, and step into their shoes. Thankfully I haven’t gone through the experiences that Ashley has been through, but I also have to not neglect how I would feel in these situations, so that’s where all the raw emotion comes from. And then once the scene is over, and we were done with it, I have to step outside of the character and come back to myself and really say that this is not my reality, and that helps. I’m pretty good at just snapping back into being the joyous, happy person that I am after a rough scene.

With a movie like this that has a mysterious supernatural element at the center, do you want the film to answer what causes something like the multiple timelines, or do you enjoy when it’s ambiguous about it?
I think I’d want an answer, but I feel like in our movie, even though it’s a psychological thriller, I feel it’s very grounded and very real. It tries to answer the questions for not only Ashley because she’s very confused while having to basically save her own life, but the [scenes with the] red X and the gum under the table helps the audience figure out what was going on, and really prove to them that it was happening rather than us just saying it was happening. So I personally would like things to be answered, but some things I can answer on my own and I like when movies or television shows give me a clue or hint to where I could figure it out.

Like Euphoria, Don’t Let Go is a grounded film with a surrealist element to it. Do you seek out a lot of projects like that, or is that just purely coincidental?
I love the surrealism in the projects that I have done, and that I’m a part of currently, but I don’t think that has to be one of the main things that makes me want to do a project. Again, it just really has to be impactful, and has to match up with my morals and values. But I do love exploring the things that I’ve been exploring with surrealism in the projects that I’ve done.

What about  Don’t Let Go reflected that criteria, choosing projects based on your morals and values?
I just love that even though it is a genre piece, a psychological thriller, I feel like our movie at hand is about family and unconditional love and sacrificial love, and I feel we all have people in our lives that we would go to the ends of the earth for. I really love that it had that message because even though there’s a lot going on, and it can get very wonky, and you could get confused at many points in the movie, you still have it in the back of your head like “OK these people love each other so much and they’re putting their life on the line to save themselves and their family. I would do the same thing too.” That’s what really got me, the groundedness of that love that you have for your family or your loved ones or whoever you would do anything for.

Do you watch the projects you’re in?
I do. I can’t watch them a lot. So if it’s a movie, the max I would watch it again—let’s just say they have a pre-screening for the cast and crew. I’ll watch that, and then I’ll watch the premiere, and then I may watch it two or three times after that, but I don’t think I could watch it a lot, especially within the time span that it came out, like back-to-back. I’ve only seen Wrinkle about three times, and of course, I’ll watch it again in the future, but I just can’t overload [on watching it] because I start to get uncomfortable watching myself.

And did you watch Euphoria every week? What’s your interpretation of the finale?
I did, yes. It was amazing because, of course, I knew what happened because of the table read. You know what happens and you can’t wait to see it, especially with an episode like that because it’s so intense and all the hard work that was put into it. I, at least, can’t really see things come to life off the page just while reading it, so to see it all happen in real-time was amazing. Our show, not to be biased or anything, is really great not only because it’s entertainment, but because we’re also having a conversation and trying to bridge the disconnect between people who don’t understand teenagers and what we’re going through. So I’m proud to be a part of Euphoria.

It was interesting too because of the fan theories about whether or not Rue was alive and one could say the finale plays into that idea without giving an answer to it.
Yes, our whole show is for your own interpretation, and I did see the things where people ask me if she was deceased or not, or if she had relapsed in the last episode. I feel like again, it’s for your own interpretation, and the questions that you may have specifically about the eighth episode will be answered in the first couple of episodes of Season 2.

If the show continues the frame it had in Season 1, where it puts its focus on one specific character for most of the episode, would you be excited to do an episode focused on Gia?
Yes, we’re working on that and trying to really just develop her character because the first season she’s just the little sister staying on the sidelines, but she’ll be older and she’ll really have her own opinion, and really become her own person. I feel like you’ll be seeing a lot more Gia in the second season.