The Event Was Held In Honor Of The Dayton Shooting Victims 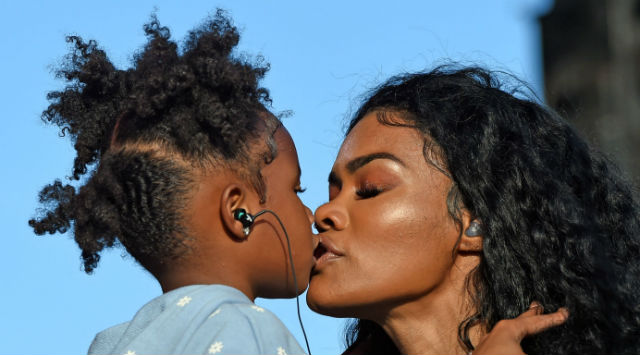 Teyana Taylor joined Chance the Rapper and others in performing at Dave Chappelle’s Block Party given in honor of the Dayton Shooting victims. Teyana held her daughter, Iman Taylor Shumpert Jr., in her arms while performing at the event this past Sunday (August 25).

Kanye West partnered with Dave Chappelle to surprise the survivors of the tragic shooting. Kanye brought his Sunday morning service vibes to Dayton while Dave offered a bit of lightheartedness. Teyana Taylor became a bit emotional during her performance in Dayton’s Oregon District.

And then @TEYANATAYLOR got emotional while paying tribute to the victims in the background 😭🥺 I cried pic.twitter.com/AmwJbSFRBS

The concert’s site was the same location where a gunman murdered nine people in sixty seconds while injuring scores of others three weeks ago. Among the deceased victims was the gunman’s sister who, like the other victims, did not stand a chance against the ammunition that her brother brought to the scene.

The Dayton Shooting furthered encouraged talks of gun control as the tragedy was one of more than 200 mass shootings that have taken place in the United States this year. Talks of significant gun reform remain stagnant in the political sphere. However, law enforcement agencies across the country have restructured to work more closely with the FBI to arrest individuals who make threats, whether passive or aggressive, involving gun violence that could lead to mass shootings.

PORSHA WILLIAMS HAS STOPPED BREASTFEEDING: 'WHAT IS A GOOD FORMULA FOR VEGAN BABIES?'