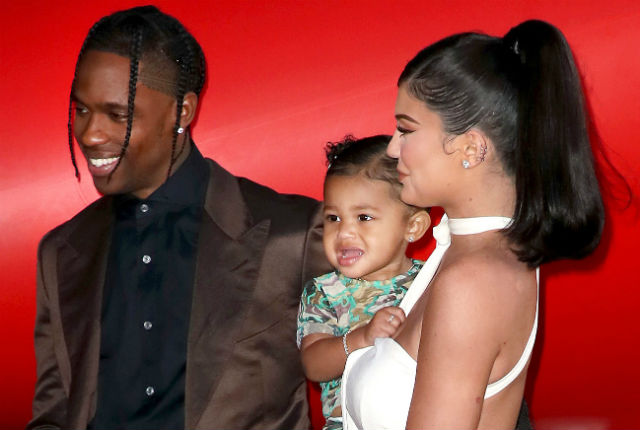 Kylie Jenner and Stormi Webster were two of Travis Scott’s biggest fans at his documentary’s screening at The Barker Hanger in Santa Monica, California. Love was the focus as Travis took pictures on the red carpet with his family at the Netflix film’s premiere.

Several photos showed the rapper kissing his girlfriend while in the spotlight. One picture was particularly adorable as it showed Travis giving his baby girl while Kylie held baby Stormi in her arms. Stormi exchanged the kiss, which made the interaction simply precious.

Some speculate that Kylie Jenner and Travis Scott are married after seeing a photo of a wedding dress loaded onto Kylie’s private jet a few weeks ago. Kylie was headed out of town to celebrate her twenty-second birthday with Travis and Stormi. The Keeping up With The Kardashians star did not confirm that she tied the matrimonial knot during her birthday getaway.

Still, motherhood has changed Kylie Jenner in many ways. The KUWTK recently told Interview Germany that her daughter came at the right time.

“I always knew I wanted to be a young mother,” Kylie shared. “I remember people used to ask, ‘Are you ready for this?’ And I always knew I was ready but you don’t know what that love and that feeling is like until after you have a child. She really comes before me so that is a lot to take in at a young age but I feel like I was definitely made for this and she has changed my life for the better.”

Stormi Webster celebrated her first birthday earlier this year. She is Travis Scott and Kylie Jenner’s only child. Travis Scott’s documentary, called Look Mom I Can Fly, is available on Netflix. Stay tuned for more Keeping Up With The Kardashians news!