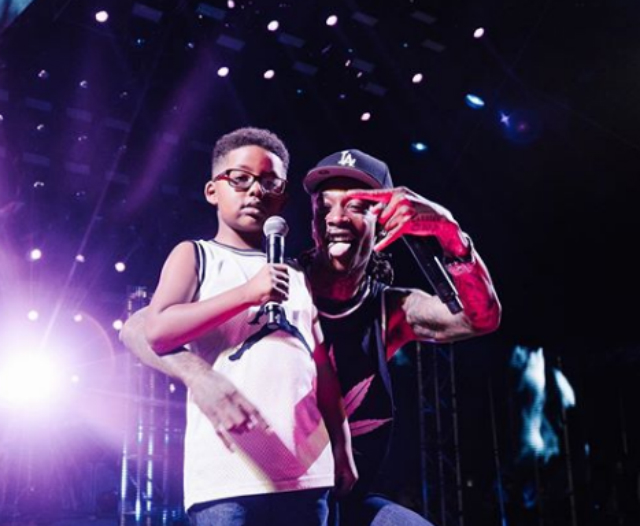 Wiz Khalifa and his son, Sebastian “Bash” Taylor Thomaz, performed at FivePoint Amphitheatre in Irvine, California, this past weekend. Fans were not ready for what the father-son duo brought to the main stage.

Bash was totally ready for all of the positive energy that the crowd sent his way. The youngster followed his dad’s instructions while engaging with the masses. “Young boss. Young king. Young superstar. Young GOAT,” Wiz said of his son.

Wiz Khalifa is presently in the middle of his ‘Decent Exposure’ tour, which marks his seventh since beginning his career as a recording artist more than ten years ago. “The artists on the tour, Moneybagg, Chevy Woods, Playboi Carti and French Montana, all different styles, are really great rappers and musicians,” Khalifa recently said of his tour’s lineup.

“Everybody’s going to be able to jam and I have a great time,” he added. “DJ Drama is going to keep everybody excited and pumped up in between because that’s what he does.”

I’ll be home to soon

Sebastian Thomaz recently joined his father in an Oreos commercial. “It was fun making a commercial because he’s really a natural,” Wiz shared with the media. “He’s not the type of kid where you got to coach him too much or make him do anything out of his character,” the celebrity father added. “All of the reactions were real and everything else was solid. Like I was real proud.”